A new model of the prehistoric shark shows it may have been bigger than we thought, and capable of spanning the world's oceans in a couple months. 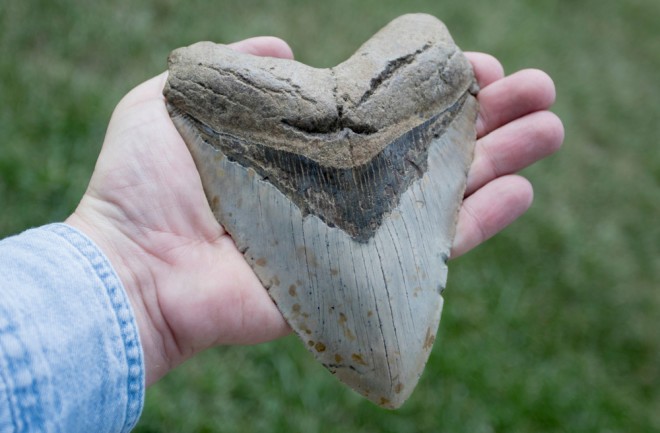 You may have seen the Hollywood version of Otodus megalodon, portrayed recently as the on-screen nemesis of sea diver Jonas Taylor (played by Jason Statham) in The Meg. Turns out, that massive 70-foot portrayal of a prehistoric predator isn’t vastly exaggerated. Scientists have now dubbed the extinct O. megalodon a “transoceanic superpredator,” based on insights provided by a 3D model of the truly massive shark.

The computer model rendering stretched a full 16 meters. That’s nearly three times the length of a great white shark. Scientists believe the shark — which went extinct around 3.6 million years ago during the early Pliocene – could have grown even bigger, reaching as long as 20 meters (approximately 65 feet). On top of that, the 3D meg weighed in at an enormous 61.5 metric tons (more than 135,000 pounds). It also might have fed on whales.

“We learned that with a cruising speed of 1.4 meters per second, that the megalodon, if it fancied, could have easily crossed the entire ocean in the span of a couple months,” says Jack Cooper, a paleobiologist at Swansea University, who was part of the international team that created the model. The megalodon’s cruise speed also meant it swam faster than any shark in existence today, the study notes. To carry out this feat, it needed to chow down over 98,000 calories per day.

“It could have very easily met that demand by consuming whales,” Cooper says. Based on the size of the mega shark’s stomach, it could gobble up a modern-day orca and other small or medium-sized cetaceans in as little as five bites. “It would have used that energy to then fuel that long-distance travel.”

Cooper and his team used teeth, a fossilized spinal column and a scan of a great white shark to digitally recreate the megalodon. Traces of the megalodon are hard to come by as cartilage doesn’t fossilize well, he explained. Estimates of its size were predominantly based on tooth size or bite marks found on marine fossils from the same period.

Luckily, an “exceptionally well-preserved fossil” discovered in the 1860s in Belgium provided the team with that they needed. These findings led Cooper and his team to dub the megalodon a “transoceanic superpredator” in a paper published this August in the journal Science Advances.

Of late, few experts doubted that megalodon crossed oceans in its search for food, says Nick Pyenson, curator of fossil marine mammals at the Smithsonian Institution’s National Museum of Natural History. But the new model adds even more evidence. “It's really nice to see a comprehensive study on the paleobiology of this species. Because a lot of ink has been spilled about different facets about just how big megalodon was … and the different parts of its anatomy that we don't yet have a clear picture on.”

Creating a 3D model of an extinct superpredator is certainly fascinating unto itself, but Cooper also stressed it has significance for the apex predators roaming the oceans today, particularly in the midst of a sixth mass extinction event.

Read More: Earth Is on the Cusp of the Sixth Mass Extinction. Here’s What Paleontologists Want You to Know

“By studying megalodon, and its role in the food web, and then by extension, what happened to the food webs after the megalodon went extinct, you can get a pretty good idea of what sort of effects you might see if we were to lose today's apex sharks,” Cooper said.

Role in the Ocean

On its transoceanic voyages, the megalodon would have played a key role in distributing nutrients across the oceans, the study notes. Appearing in the fossil record around 20 million years ago, it ruled the oceans for around 13 million years. Possible explanations for the megalodon’s disappearance include competition with other smaller sharks, loss of habitat due to sea level fluctuations, and declining prey.

Cooper’s paper posits that while megalodon may have cruised faster than other sharks, its top burst speed may have been slower due to its lumbering size, potentially allowing smaller sharks to outcompete the giant for food.

Its extinction likely led to impacts on marine ecosystems, Cooper says, via trophic cascades. The disappearance of an apex predator such as the megalodon could have shifted the balance, releasing prey populations from hunting pressure over time. “That’s something we do see in the fossil record, we see whales actually start to get bigger,” he adds.

“By understanding the processes that followed extinctions back then with species such as the megalodon, it can give us an idea of what to expect and what to anticipate today,” Cooper says.

Pyenson agreed, underlining that research shows current C02 levels have already reached those of the Pliocene. “Future oceans are going to look like the oceans in the recent past,” Pyenson said. “So, understanding what happened in the Miocene and Pliocene oceans will be instructive for potential future states that we may see or our descendants might see.”

Dogs May Be Key in Early Bladder Cancer Detection