Here’s How Earthquakes Cause Tsunamis

Scientists who study earthquakes and their aftershocks are still learning more about their effects. 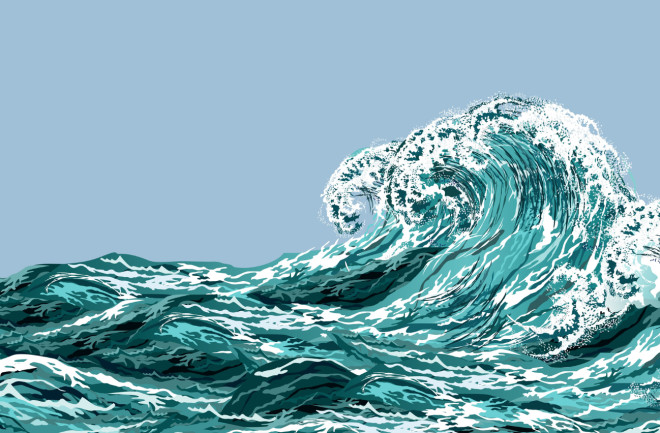 Tsunamis can be devastating natural disasters — destroying homes and nuclear power plants and leaving thousands of deaths in their wake. In some cases, entire villages are wiped off the face of the Earth with little trace.

While these giant waves can be caused by a number of incidents, including landslides and volcanic eruptions, one of their primary drivers are earthquakes. Wondering how exactly the shaking of the Earth leads to walls of unstoppable seawater?

Earthquakes usually occur due to the movement of tectonic plates. “Tsunamis are caused by any sudden movements of the seafloor or the lake floor,” says Kate Clark, a coastal earthquake geologist at GNS Science, a crown research institute in New Zealand.

By far the most common way to generate a tsunami, she continues, is when one plate pushes up and over another one under the sea: “That causes widespread subsidence. The seafloor goes up on one side and down on the other,” Clark says.

As one plate climbs over and pushes the other beneath, its top lip consequently pushes water in front of it. The tsunamis generated by this tectonic activity don’t only move one direction, since water also rushes in to fill the void left behind the upper lip.

The size of the tsunamis generated in this case depends on both the size of the initial quake and the depth of the surrounding ocean. If the quake happens in extremely deep water, it may not be strong enough to generate a tsunami. Conversely, if the water is too shallow at the epicenter, the quake is also unlikely to displace enough water to create a serious wave.

The epicenter of the Tōhoku earthquake that occurred off the coast of Japan in 2011 and damaged the Fukushima Daiichi Nuclear Power Plant occurred in the relatively deep water of the Japan Trench. Yet the magnitude of the quake was between 9.0 and 9.1 on the Richter scale. How was this possible?

“It was a really big earthquake,” Clark says, explaining that the displacement was more than 164 feet at its largest on the seafloor — in other words, the distance that one plate pushed up and over the other. “It’s just a massive amount,” she adds.

The resulting tsunami boasted a maximum wave height of 130 feet, impacting an estimated 1,250-mile slice of the Japanese coast, according to the National Oceanic and Atmospheric Administration. The wave hit Japan within half an hour of its formation.

The Indian Ocean earthquake of 2004 didn’t see as much seafloor displacement as the Tōhoku quake. But a much longer stretch of fault line was affected in this case: at least 750 miles. The earthquake was also larger than the Tōhoku quake, with a magnitude of 9.1 to 9.3 and an epicenter west of Thailand.

The waves generated reached as high as 100 feet. And because the affected area was so lengthy, the waves reached far more coasts than the Tōhoku quake’s tsunami. This tsunami is sometimes considered the deadliest in recorded history, destroying land and killing people in Thailand, Indonesia, Sri Lanka, India and the Maldives, and reaching as far as East Africa.

The pushing of one tectonic plate beneath another may cause the largest tsunamis, but tsunamis can also break out when two plates move alongside each other — especially where topographic features like underwater mountains might break apart, pushing water in either direction.

Aftershocks from any type of earthquake can also cause tsunamis, though this doesn’t occur frequently, Clark says. Quakes can even cause landslides to form under or drop into the water, pushing a wave out in front of it.

This happened in Papua New Guinea in 1998, when a relatively small 7.0-magnitude quake occurred off the northwestern coast of the country. The tsunami actually hit a little later than it would have if it had been from a regular subduction event; scientists later determined that an underwater landslide caused the catastrophic waves that damaged the coastline.

In any case, scientists who study earthquakes and the changes they generate are still learning more about the effects these have. The large waves caused by the Indian Ocean quake in 2004, for example, revealed a startling lack of detection equipment to warn people about the catastrophe coming their way.

Researchers have since improved the network of detection equipment, Clark says, but it was a difficult lesson to learn.

6 Types of Minerals and Metals Found in Your Cell Phone