The Maniq’s DNA tells a story of physical and cultural isolation that spans thousands of years. 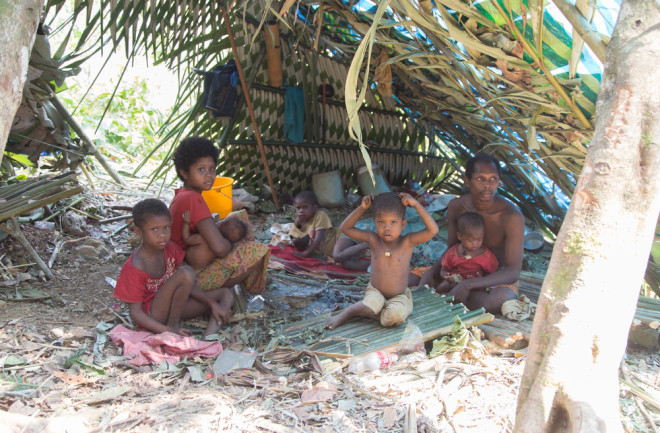 While some Maniq have left their small villages, many still live as their ancestors did millennia ago. (Credit: kunanon/Shutterstock)

As usual, the Maniq were nowhere to be found.

A group of anthropologists had hired a team of local Thai rubber tree farmers to roam the hills in search of the nomadic hunter gatherers, but no one had been able to locate them. Back in the village, Austrian evolutionary anthropologist Tobias Göllner waited impatiently with his two colleagues, Helmut Lukas and Helmut Schaschl. If they could not make contact with the Maniq in the next week, they would have to return to Vienna empty-handed.

Just as the academics were beginning to lose hope, one of the planters returned with good news: He had made contact with Ay-Kai, the “speaker” of a Maniq family group who Lukas had befriended over years of fieldwork. Ay-Kai’s family group was waiting for the researchers nearby.

Göllner, the two Helmuts and a Thai linguist named Pacchira Chindaritha quickly packed up their things and hired a jeep to drop them off at the end of a rutted-out farm road. When they got there, the Maniq had erected a camp under the shade of a large limestone cliff. One sleeping platform with a thatched roof made from sticks and fresh leaves was set aside for the visitors.

For the first few days, the adult Maniq mostly ignored Göllner’s presence. Ay-Kai, Lukas and Chindaritha caught up with each other during idle moments, but Göllner spent most of his time with the youngsters. “The children are not afraid of you. They’re very curious,” Göllner says. “From their perspective, I’m not really good at anything. They like teaching you stuff.”

Finally, on the researcher’s last day at the camp, Ay-Kai asked Lukas the obvious question. Why had this young, seemingly-frail Austrian come all this way to visit them? With Chindaritha translating, Göllner did his best to explain his motivations. He wanted to trace the Maniq’s ancestry through genetic analysis. “You can’t really explain bifurcating trees to them from a genetics perspective,” Göllner says. “But you can use trees as a metaphor.”

Göllner’s patience with the youngsters seemed to have paid off. The Maniq took pity on the strange young man and agreed to donate some saliva for later analysis. Three years later, in a paper in Genome Biology and Evolution published in April, Göllner and his colleagues revealed the most detailed genetic analysis to-date of the primarily hunter-gatherer society.

For millennia, the Maniq people have subsisted on foraged plant foods and wild game in the forested hills on the Thai-Malay border. And though the Maniq have had increasing contact with the outside world in recent decades, little is known about their ancestry.

Prior to Göllner’s study, most theories on the origin of the Maniq centered around a great migration that populated the Malay peninsula between 40,000 and 50,000 years ago. The theories posit that the Maniq’s ancestors, the hunter-gatherer Hòabìnhian society, were among the first humans to inhabit southern Thailand. If the Maniq are indeed descendents of this ancient migration, their genetic lineage might be closely linked to other diverse ethnic groups in isolated parts of Southeast Asia — including the Semang in Malaysia, certain Filipino islanders and the Andamanese people, Indigenous inhabitants of the Andaman and Nicobar Islands in the Bay of Bengal.

Göllner’s analysis supports the Hòabìnhian theory. The Maniq seem to be very closely related to the Semang, an Indigenous group from lands just over the Malay border. But, importantly, Göllner found strong evidence that the Maniq had not actually mixed with these populations for thousands of years. “We have this huge genetic drift, which points to a very long period of isolation,” he says. “Unfortunately, the algorithm we use to estimate the length of that period isn’t very good with heavily drifted data. The estimation was around 50,000 years, but we couldn’t publish it because of how imprecise it was.”

Most other ethnic groups that can trace their lineage back to Hòabìnhian ancestors have mixed with other East Asian populations in the modern era. Though Göllner’s analysis revealed the presence of DNA from other East Asian sources in the Maniq’s genetics, this influence seems to be relatively small, comparatively. In other words, the Maniq may be the most direct descendants of the hunter-gatherers that populated the Malay peninsula tens of thousands of years ago.

What Göllner found in the DNA of 11 Maniq individuals is mirrored in the society’s culture and traditions. For example, their language has ancient roots that make it difficult for native Thai speakers to learn. And while many Indigenous peoples in Southeast Asia have embraced agriculture, the Maniq still live as their ancestors did. They hunt wild meat, gather nuts and tubers and use medicinal herbs to treat illness. Essentially, the remote, densely forested hills of Southern Thailand have buffered the culture from outside influence.

During the rise and fall of colonialism, the society retained was mostly left alone by outsiders. But global capitalism may prove a more persistent force of change. In recent decades, the Maniq’s territory has shrunk at the edges; neat rows of rubber trees have replaced once-wild forests. It is not uncommon for Maniq to barter their labor for clothing or food in the villages that spring up near these plantations.

Influence, too, has come from the curious academics and tourists who come bearing gifts and ideas. Ultimately, though, Göllner hopes that these exchanges will prove beneficial to both sides. “Industrial societies are very expansive. Contact with the Maniq is inevitable — it will happen,” he argues. "It's hard to gauge exactly how much we are influencing them, though we try to minimize it. What I can estimate is how much they influenced us, both scientifically and personally."

Though it’s probably too late for Göllner to become proficient as hunter or gatherer, he’s still learned a great deal from his time with the Maniq, whose knowledge is not limited to practical skills. Maniq culture has survived, in part, due to their skill in sustaining a community. This can be observed in simple practices, like those surrounding possessions, which are often regarded as communal resources. A shirt, for example, may be passed from one person to another as needed for trips to nearby village. At meal times, everyone must have food in front of them before anyone can begin to eat. The same goes for cigarettes.

“You roll cigarettes until everyone has one. The last one is for you,” Göllner says.

The Maniq are likely one of the oldest communal societies on Earth, and they may have something to teach the rest of us. Göllner hopes that his work will motivate people in Thailand and beyond to value and respect the Maniq. If he’s right, they might have a chance at sustaining their traditions for a little bit longer. “Hunter-gatherer populations are the most important source of insight that we can gain from humans,” Göllner says. “It’s the way that Homo sapiens lived for probably 280,000 years. We have to be aware that these practices still exist. If you have an idea in your head about human nature, the first thing you should do is see if it holds true in a hunter-gatherer context.”