Can new guidelines improve the ecotourism experience for both humans and other animals? 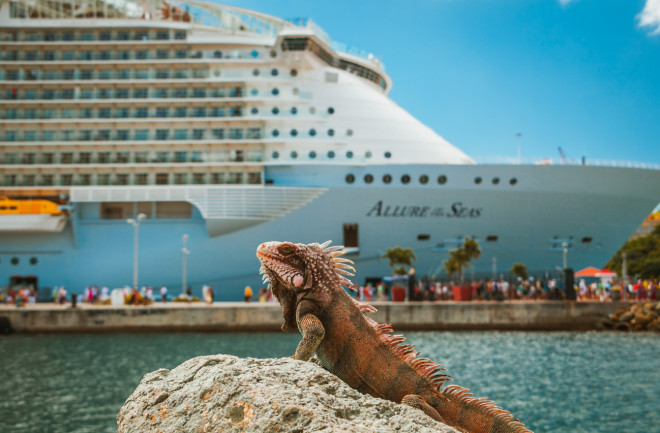 Tourists scoping out Iguana iguana from boats in Latin America may be treated to the critters bobbing their heads furiously. This odd movement isn’t the reptiles nodding along to an unheard reggaeton beat — it may actually be a sign of distress, according to a recent study published in the journal Biotropica.

“One of the functions of head bobbing can be to communicate danger to [other iguanas],” the researchers write. “Boat activity could provoke anti-predator behavior, due to their large presence and loud noise, which could be perceived as threatening.”

Todd Lewis, an ecologist at the University of the West of England in Bristol and co-author of the paper, worked at the Caño Palma Biological Station in Costa Rica for several years. There, he saw boat traffic steadily increase to satisfy tourists eager to spot iguanas and other species. “When we used to get two or three boats sort of clustering,” he says, “I started to notice that animals would disappear from the riparian edge.”

Certainly, some iguanas fled. Those who remained might “vigorously head bob” or display the flaps of skin under their necks known as dewlaps, says Elizabeth Rice, an ecological consultant and co-author of the study. Despite its somewhat humorous image, this behavior could have implications for the species’ welfare, she adds. Even fleeing into the nearby forest can interrupt an iguana’s basking ritual, which leads to lethargy and an increased vulnerability to predation.

“There are multiple species that can potentially be affected in the same way. It's just been unmeasured until now,” Lewis says. That sentiment gains added urgency when you consider the resurgence of international tourism following the COVID-19 pandemic. According to the United Nations’ World Tourism Organization, global international tourist arrivals more than doubled in January 2022 compared to 2021. These circumstances have forced some researchers and public officials to reconsider the way that ecotourism operations are conducted.

While floating along the Kinabatangan River in Malaysia, you may spot proboscis monkeys (Nasalis larvatus) chilling on branches or having a munch. Researchers recently sought to understand how six different groups of these peculiarly appendaged monkeys react to tour boats: They sped in close, moved in slowly and coasted at a distance with a motorboat.

Tourists on a boat cruise along the river of Kinabatangan in Malaysia. (Credit: Magic Orb Studio/Shutterstock)

When moving nearby at high speed, the monkeys became agitated, scratched themselves, behaved aggressively toward one another, and fled into the nearby forests, says Benoit Goossens, director of the Danau Girang Field Centre and a member of the research team.

This behavior, the researchers concluded, is borne of stress. “We saw that each approach more or less had an impact on the behavior of the proboscis monkey,” Goossens says. “What[ever] they were currently doing — whether it was feeding, grooming or resting — we saw that there was an impact.”

The proboscis monkey is listed as an endangered species on the IUCN Red List. In terms of potential impacts on the species, stress from approaching boats doesn’t compare to other threats facing them, such as deforestation and hunting. Nonetheless, the findings show that tour boats are bothering the monkeys.

“We currently have students looking at the same thing with elephants,” Goossens adds. “We expect to find something very similar.”

Whales on the Move

Heading out on a whale watching experience can be the pinnacle of any trip. Caleta Chañaral de Aceituno, off the coast of Chile, is a prime spot for spotting fin whales (Balaenoptera physalus) as they gather en masse to feed. But as with the bobbing iguanas and scratching monkeys, these gentle giants don’t necessarily enjoy the experience of being watched.

Macarena Santos-Carvallo, a marine biologist at the Universidad de Valparaíso, recently led a study to monitor fin whales’ activity. “When the boats came, we saw that the whales would move faster than before,” she recalls. Their movements became more unpredictable; instead of heading in a straight line, they changed course while underwater. This zigzagging and erratic movement was probably an evasion tactic, Santos-Carvallo explains, but when more boats were present, the whales simply tried to get away.

“Ecotourism in general has positive consequences as it provides knowledge of wildlife and the importance of ecosystems,” she says, though she’s concerned that continual pressure from boats could drive the whales away from their preferred feeding sites.

Each of the mentioned researchers agree that completely halting ecotourism is not possible or necessary. Rather, it must be carried out in a way that takes the potential impact on wildlife into account.

To limit impacts on iguanas or other similarly affected species, for instance, Lewis believes reducing the number of tour boats on rivers and increasing their distance from animals could help. “It just takes a bit of organization and human planning to minimize the amount of time that the animals are exposed to disturbances, particularly at peak tourist time,” he says.

Goossens mentions a key finding from his team’s study: Boats can observe proboscis monkeys from around 200 feet away and cause minimal disturbance. “The idea is mostly to come up with guidelines, so that we can find a compromise between making the tourists happy and also [ensuring that] the monkeys, elephants, and all the other species are not stressed,” he says.

Such measures would undoubtedly make for a better all-round experience for both wildlife and tourists.