Our closest evolutionary relatives, the Neanderthals (Homo neanderthalensis), were once spread across Europe and as far east as the Altai Mountains in southern Siberia. 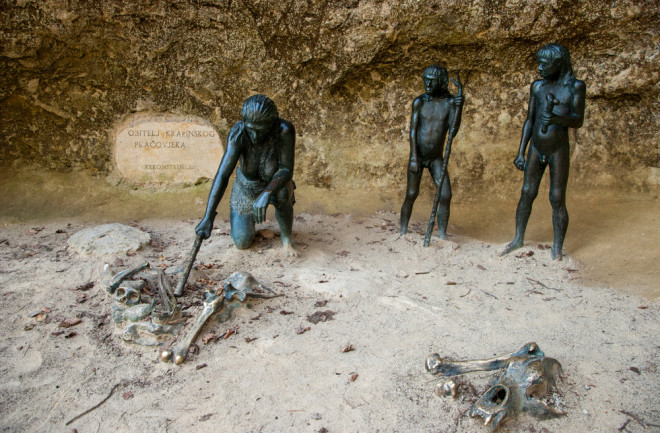 Our closest evolutionary relatives, the Neanderthals (Homo neanderthalensis), were once spread across Europe and as far east as the Altai Mountains in southern Siberia.

Yet more than 160 years since the first Neanderthal fossils were unearthed in Europe, little is known about the group size or social organisation of Neanderthal communities.

Using ancient DNA, a new study provides a snapshot of a Neanderthal community frozen in time.

With our colleagues, we show a group of Neanderthals living in the Altai foothills around 54,000 years ago consisted of perhaps 10 to 20 individuals. Many of them were closely related – including a father and his young daughter.

The first genetic clues to Neanderthals were obtained 25 years ago from a fragment of mitochondrial DNA, which is found in cell structures called mitochondria rather than in the cell nucleus.

Subsequent mitochondrial DNA studies and genome-wide nuclear data from 18 individuals have sketched the broad brushstrokes of Neanderthal history, revealing the existence of many genetically distinct groups between about 430,000 and 40,000 years ago.

Our new study is the first to analyse ancient DNA from the teeth and bones of multiple Neanderthals who lived at around the same time. The fossils came from archaeological excavations of Okladnikov Cave in the mid-1980s and Chagyrskaya Cave since 2007.

These caves were used by Neanderthals as hunting camps. The remains of animals such as bison and horses are abundant, and more than 80 Neanderthal fossils were also found in Chagyrskaya Cave – one of the largest such collections anywhere in the world.

Both sites also contain distinctive stone tools that bear a striking resemblance to artefacts found at Neanderthal sites in central and eastern Europe.

To paint a detailed picture of the genetic makeup and relatedness of these Neanderthals, we analysed mitochondrial DNA (which is passed down the female line), Y-chromosomes (passed from father to son) and genome-wide data (inherited from both parents) for 17 Neanderthal fossils – the most ever sequenced in a single study.

The teeth and bones came from 13 individuals: 11 from Chagyrskaya Cave and two from Okladnikov Cave. Seven of the Neanderthals were male and six were female. Eight were adults and five were children or adolescents.

Among them were the remains of a Neanderthal father and his teenage daughter, as well as a pair of second-degree relatives – a young boy and an adult female, perhaps his cousin, aunt or grandmother.

This finding is consistent with a previous genomic study of a Chagyrskaya Neanderthal and the presence of distinctive stone tools at Chagyrskaya and Okladnikov Caves that closely resemble those found at Neanderthal sites in Europe.

Taken together with the evidence for their close family connections, these indicate the Chagyrskaya Neanderthals must have lived – and died – at around the same time.

On the brink of extinction

Our analyses also revealed this Neanderthal community had extremely low genetic diversity – consistent with a group size of just 10 to 20 people.

This is much smaller than the genetic diversity recorded for any ancient or present-day human community, and is more like that found among endangered species at risk of extinction, such as mountain gorillas.

The Chagyrskaya Neanderthals were not a community of hermits, however. We discovered their mitochondrial DNA diversity was much higher than their Y-chromosome diversity, which can be explained by the predominance of female (rather than male) migration between Neanderthal communities.

Denisovans are a sister group to Neanderthals and they interbred at least once. This happened around 100,000 years ago, producing a daughter from a Neanderthal mother and a Denisovan father.

Yet even though Denisovans were present at Denisova Cave at around the same time as the Neanderthals living at Chagyrskaya and Okladnikov Caves, we found no evidence for Denisovan gene flow into these Neanderthals in the 20,000 years leading up to their demise.

In recent years, multiple lines of evidence have shown Neanderthals possessed technical skills, cognitive capabilities and symbolic behaviours as impressive as those of our ancient Homo sapiens ancestors.

Our genetic insights add a new social dimension to this picture. They provide a rare glimpse into the close-knit family structure of a Neanderthal community eking out an existence on the eastern frontier of their geographic range, close to the time when their species finally died out.

Laurits Skov is a Postdoctoral research associate at the Max Planck Institute for Evolutionary Anthropology. Richard 'Bert' Roberts is the Director at the ARC Centre of Excellence for Australian Biodiversity and Heritage (CABAH) at the University of Wollongong. This article is republished from The Conversation under a Creative Commons license. Read the original article.