The Largo di Torre Argentina in Rome, Italy, is a cat sanctuary and is also the square where a group of senators stabbed Julius Caesar to death in 44 B.C. 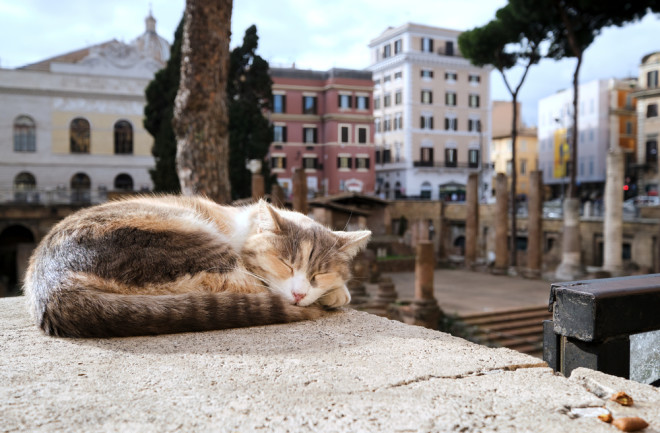 On March 15, 44 B.C., Julius Caesar walked into the hall Curia of Pompey for a meeting of the senate. Instead of debating, or dictating, a group of senators opposed to his rule stabbed him some 23 times. Now infamous, this date, or the Ides of March, turned the tide of Roman history.

But fast forward to today and the site of Caesar’s death is changing the lives of Rome’s stray cats. A worthy legacy, but perhaps not the one Rome’s famous ruler had in mind.

Largo di Torre Argentina is a square that sits in the center of Rome. Unearthed in the 1920s, the site is home to four Roman temples dating back to the era of the Roman Republic. In addition, an old theatre and the meeting hall Curia of Pompey are found there.

One of the temples, known as Temple C, was likely built between the fourth and third century B.C. and was thought to have been dedicated to the goddess Feronia. Among other things, she was associated with wildlife and fertility. Archaeologists believe that Temple A belonged to Juturna, the goddess of fountains; D to Lares Permarini, who watched over sailors; and B to Fortuna huiusce diei, the goddess of fate.

More on Cats Throughout History:

Almost immediately after excavations began in the historic square, the city’s homeless cats began to wander into the site. Today, one can seen dozens of them sauntering, lazing, and sunbathing on and amongst the ruins. This scenario has played out across other archaeological sites around the city, but none are as famous as Torre Argentina.

the Torre Argentina Cat Sanctuary started out as an informal operation led by Roman gattare, or “cat ladies,” to feed and care for the cats and soon developed into a fully-fledged organization.

These generous and devoted cat lovers cared for the roaming cats for decades until the sanctuary was founded in 1993. Now, volunteers with the organization care for and feed over 200 stray cats. Felines that are available for adoption, benefit not only from food and shelter, but also veterinary care. In what was an ancient place of worship, these cats now find a safe place to call home.

In antiquity, many civilizations revered cats and often connected them to divinity, particularly in Egypt. Diodorus Siculus, a Greek author who wrote in the first century A.D., recounts the tale of a Roman soldier who made the mistake of killing a sacred moggy in Egypt. He wrote that, “Neither the officials sent by the king to beg the man off nor the fear of Rome, which all the people felt, were enough to save the man from punishment.”

Siculus witnessed this event with his own eyes while in Egypt. The Romans themselves never held cats in such high regard, yet they did claim a place as household pets from around the first century A.D.

Roman feline friends appear on mosaics, steles and furniture. Some had them as household companions, finding additional value from their talents in controlling pests.

Of course, tourists flock to the site to admire the ruins, but many, too, visit to see the cats. Unfortunately, however, history has not gifted us the knowledge of whether Julius Caesar himself was a cat owner or even liked cats. A prevailing popular myth exists that Caesar – alongside other historic figures such as Alexander the Great and Genghis Khan – did suffer from ailurophobia, or a fear of cats. Though it’s questionable if this is true. Thus, we are left to ponder what the dictator perpetuo would think of this lasting cat sanctuary legacy in the place of his demise.