Blue whales need to find dense patches of krill to survive. A new study suggests that they accomplish this by tracking wind-driven events that stir up their prey. 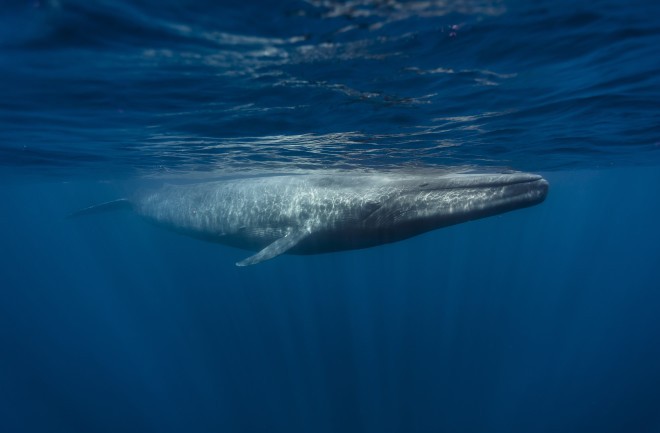 The largest animals to ever live are intensely dependent on some of the smallest. Blue whales feed exclusively on tiny marine organisms — especially krill — and rely on huge numbers of them.

But blue whales face a number of challenges in finding their food. The ocean is a big place, for one thing. Finding a needle in a haystack is probably a lot easier than finding a patch of krill in the ocean. There are also logistical hurdles: blue whales need to find dense enough patches that it’s worth spending the energy to eat them. How blue whales hone in on these rich feeding areas has been a mystery, but recently published research points to a remarkable method: chasing the wind.

In his quest to understand this interplay, lead author John Ryan, an oceanographer with the Monterey Bay Aquarium Research Institute, started small — literally. “That's where I started, studying microscopic algae and the physical properties of ocean circulation phenomena that drive their distributions,” he says. Baleen whales — which include humpbacks, minkes, and blue whales — are intimately connected to these smallest organisms.

“One of the reasons why blue whales are the largest animal to ever evolve on the planet Earth are that they are extremely efficient about harvesting energy from their environment,” Ryan adds.

A couple of years ago, Ryan and his colleagues were working on a study of wind-driven upwelling events, which take place along the eastern coasts of continents and occurs in regions where the wind pulls water at 90-degree angles relative to the rotation of the Earth, drawing deep, cold, nutrient-rich water to the surface. These upwelling events, the authors noted in that paper, are associated with exceptionally dense aggregations of krill, which in turn draws in the blue whales in huge numbers.

“I mean like 40 blue whales in a 1 km radius,” Ryan says. “And they were all foraging on this same massive patch of krill.”

They also noted that in these huge aggregations of whales, on two separate occasions, the animals were making calls to each other in a particular signature associated with foraging. Whales are known for their ability to communicate over vast distances with these low, deep calls.

“While it is a massive foraging area, it is a needle in a haystack problem,” Ryan says, “and any one individual is going to have very limited encounters with these essential foraging features. But if one of them encounters it and signals the others, then they are all able to take advantage of it. This results in a much more efficient supply chain strategy for the entire original population.”

This led the researchers to theorize that blue whales are not only able to find these upwelling events, which are transient, but also congregate around them. To test the theory, they needed to be able to demonstrate that the whales were moving towards these events as they occurred, which required them to know where the whales were at a given time, where the upwelling events were, and how much they overlapped.

The first thing the scientists had to prove was that their method of finding whales was accurate. They had years of passive acoustic monitoring data from the Monterey Accelerated Research System (MARS) observatory of the sound of whale calls. But they needed to test if that monitoring was capable of accurately pinpointing whales.

To do that, they compared GPS data of tagged whales with the direction derived by the passive data, using accelerometers on the backs of tagged animals to verify that the calls they were identifying came from them.

Comparing that data to coastal monitoring of upwelling events, as well as krill aggregation events, showed that “patterns of whale movement corresponded to patterns in atmospheric, oceanic and prey conditions,” the authors wrote, meaning that the blue whales were able to track the events to find their prey.

Though, Ryan notes, it’s still not clear exactly how blue whales achieve this. Since these upwelling events happen in roughly the same areas year-over-year, and it’s known that whales have good memories, they likely remember these rich areas and return to them each year. As for finding the actual events inside these rough regions, it’s possible that they hear the sound of the wind over the waves, or they can feel some aspect of the temperature gradient created by the upwelling.

“But here's what I think is the most probable hypothesis that already has support: they hear each other.” Whales, after all, are highly social animals. “They have evolved over millions of years longer than we have, in an environment conducive to the transmission of sound,” Ryan says, adding that the animals would likely have taken advantage of that throughout their evolution.

Leigh Torres, an associate professor at the Oregon State University Marine Mammal Institute, says the results are not only convincing, but an important step forward when it comes to conservation strategies. “I think sometimes people think whales are cool, they're big, but they're not that much of a thinking, adapting creature. But I think what we're learning is that they are, and they have to be, because again the ocean has patchy resources.”

This has important implications for management, she suggests. “In the ocean, we’re hopefully moving more towards this idea of dynamic areas. The idea is that you can shift the boundaries in space and time. ‘Okay, we needed to put this protective barrier on, but now we can take it off.’ But to do that you need to understand these connections between the physical oceanography and the biological.”

The authors also noted that between upwelling periods, the whales they studied spent most of their time in an area transected by four shipping lanes. For Torres, the important question is: “Now that we have this knowledge, what do we do with it to protect the animals? Because ship strike is a real problem for the blue whales and fin whales that feed in that area. So that would really open up some useful discussions.”

Ryan also noted that a key advantage of their findings was that they proved they were able to track whales by listening in on them, showing the promise of real–time monitoring and avoidance for conservation. “If we are going to support the recovery of endangered species,” he says, “we have to know where and how they live.”

When People Vandalize Art, Conservators Come to the Rescue