Before Pompeii, A Volcano Cloaked This Ancient Village In Volcanic Ash

The 4,000-year-old ruins of the village of Afragola reveal agricultural abundance in ancient Rome. 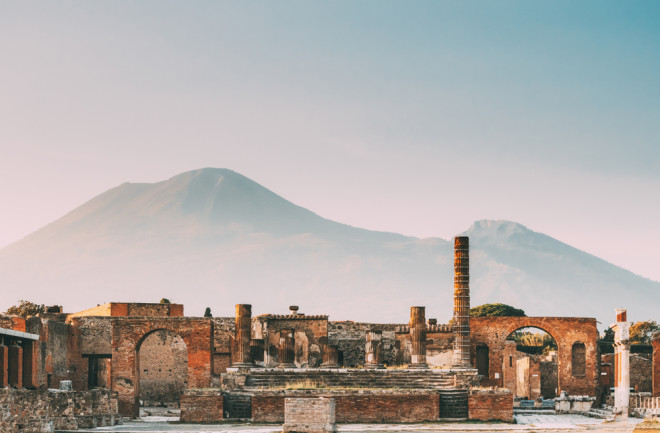 About 4,000 years ago (and approximately 2,000 years before the burial of the city of Pompeii), an early eruption of Mount Vesuvius cloaked another ancient village in a cover of volcanic ash.

Today, the ashy remains of this village paint a nearly complete picture of ancient life in Southern Italy. And according to a new paper published in the Journal of Archaeological Science: Reports, this life featured a cornucopia of autumnal agricultural goods.

A Look into Village Life

Located about 10 miles to the west of Mount Vesuvius, the ancient village of Afragola was covered in a sheet of ash, silt and alluvial sediments when the volcano erupted around 4,000 years ago. Over the years, this sheet of material protected the site, making it ideal for archaeological investigation.

"Afragola was buried by a gigantic eruption of Vesuvius, and it tells us a lot about the people who lived there," says Tiziana Matarazzo, a paper author and an anthropologist at the University of Connecticut, in a press release. "The cover of ash was so deep that it left the site untouched for 4,000 years — no one even knew it was there. Now we get to learn about the people who lived there and tell their stories."

After identifying the village as a result of a nearby construction project, Matarazzo and a team of archaeologists and anthropologists uncovered approximately 5,000 square meters of Afragola. This makes the village one of the most studied sites from this time period in Southern Italy.

In addition to identifying shelters where villagers would have lived with their immediate families, the team also found a sizable storage structure in the village where grains and agricultural goods would have been stored and shared.

The remains of this warehouse suggest that the villagers of Afragola profited from an abundance of food sources, including a diversity of grains, an assortment of nuts and acorns, apples, pomegranates and cornelian cherries — all of which were preserved within the structure as a result of their coating of ash.

This agricultural abundance, the team says, suggests that the volcano exploded in the midst of the villagers' fall harvests.

"By finding fruits and agricultural materials, we were able to identify the season of the eruption, which is usually impossible," Matarazzo says in a press release.

According to the team, the blast occurred in several successive stages. In the first of these stages, Vesuvius sent out a burst of rubble in the opposite direction of the village. This enabled villagers to flee and explains why the site shows signs of escaping villagers (including the footprints of frantic adults and children) but no buried bodies.

Ultimately, a shift in the wind sent a cloud of material back towards the village, covering it completely in ash. During this stage of the eruption, a thick layer of volcanic debris created casts of the city and its immediate surroundings, coating the area in a durable material known to scientists as cinerite. After 4,000 years, the cinerite casts of the site have remained resistant to wear and tear.

As well as protecting the huts and the storage warehouse, the cinerite casts also preserved a diversity of plant life surrounding the site, strengthening the team’s conclusions about the seasonality of the blast. In fact, the imprints of leaves and fruits found around the village provide further evidence that the eruption occurred in the fall.

According to the team, there's much more to study within the remains of Afragola. Future studies will investigate the variety of animal bones also found on site, providing new insights into the traditions of animal management in ancient Southern Italy.