Elephants may have a 22-month gestation period for protection and social benefits. 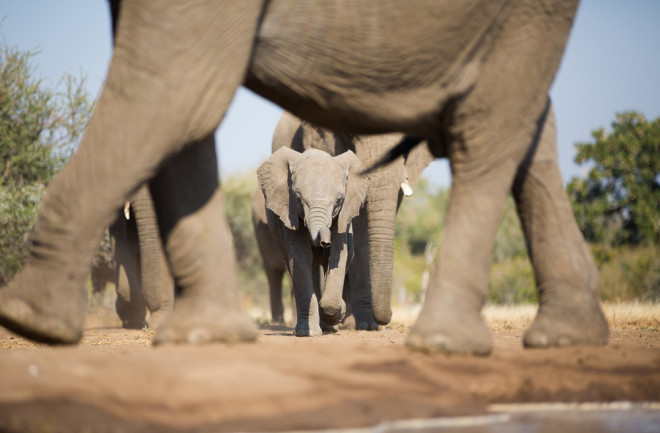 Latest findings about newborn elephants and herd behavior are, “remarkable,” according to behavioral researchers at the University of Oxford in collaboration with Save the Elephants (STE), a non-profit based in Kenya. Researchers investigated how elephant herds alter their behavior after a mother gives birth and found, they don’t.

“It's slightly unexpected,” says Dr. Lucy Taylor, a junior research fellow and the study’s lead researcher whose findings were published in the journal Animal Behaviour.

Taylor predicted to find a slowdown, or “dip,” in the herd’s movement. But instead found the ability and need ‘to keep up,’ which may explain why elephants have the longest pregnancy of any mammal. Further, she postulates that elephants may have evolved their long gestation period to help herds stay together and remain protected.

“It's actually incredible. Think about it. These elephants give birth to a baby, basically 100-kilogram baby [220 pounds], and then carry on. How? It’s crazy!” says Taylor. “It’s a remarkable, huge feat of resilience and stance to be able to get up and go, essentially, and carry on.”

This study is the first of its kind. Researchers and STE partnered to understand elephant behavior and learn more about how to protect the threatened species. They fitted pregnant elephants with GPS collars, tracked and monitored their movement similar to how smart watches track human steps. Researchers gained rare insight into how pregnancy, birth and newborns impact the movements of African Savanna elephants.

“They're actually quite hard to follow in the field because they're like four-by-four vehicles, or terrain [vehicles], and it can be quite difficult if they go across a river,” says Taylor. “And, because they're pregnant for 22 months and they often get birth at night, it’s actually very rare to see an elephant burst.”

Up until now, Taylor says most of the research on newborn elephants has been anecdotal. Using data from a long-term elephant monitoring project that STE began in 1997, Taylor studied the average daily speed of a pregnant elephant and a mother who just gave birth.

With more than 20 years of tracking data on elephants in Samburu, in Northern Kenya, Taylor’s data analysis showed that the mother’s movement and pace does not significantly change during pregnancy or even in the days immediately following the elephant’s birth. There’s a slight drop in speed during birth, but more for first time mothers, says Taylor. The herd’s speed is back to normal pace on the first complete day of the newborn’s life. Baby elephants emerge from the womb able to keep up with their family and larger herd.

A Longer Pregnancy Protects the Herd

Taylor and other researchers believe this specific research explains why elephants have a 22-month long gestation period.

“There are significant advantages to them to be able to move straight after birth, […] like predator protection,” says Taylor. “There's quite a lot of blood that comes out when they give birth that could attract predators, so the baby is quite vulnerable. If they can get up and go, that is the safety thing because moving away from that birth sight is going to be an advantage. […] It’s going to be a bit safer if that baby can move.”

Feeding the baby is also key. An elephant mother needs food and water to feed her young. "Being able to move right away and going to get food and water is really important, particularly bearing in mind things like water resources in Africa aren't everywhere,” says Taylor.

This leaves herds traveling several miles to find a water source, and food. “They’re not very efficient at digesting their food, so they need to eat a lot of food,” says Taylor. Elephants can spend 16 hours a day eating.

Taylor says a newborn elephant and mother elephant who can move with the herd immediately after birth benefits from staying with the herd, including protection from predators. And there are social benefits, too. While a matriarch will lead the herd to water and food, a system called “other mothering,” affords new mothers breaks. In human vernacular, this is free babysitting from teenage elephants.

Of her research, Taylor says, it “both improves our understanding of elephant and social behavior and demonstrates the phenomenal abilities of elephants.”