Australia Is Hiding Giant Dinosaurs Below Its Surface

Fossils reveal that a new species of titanosaurian sauropod roamed the Outback around 92 million years ago. 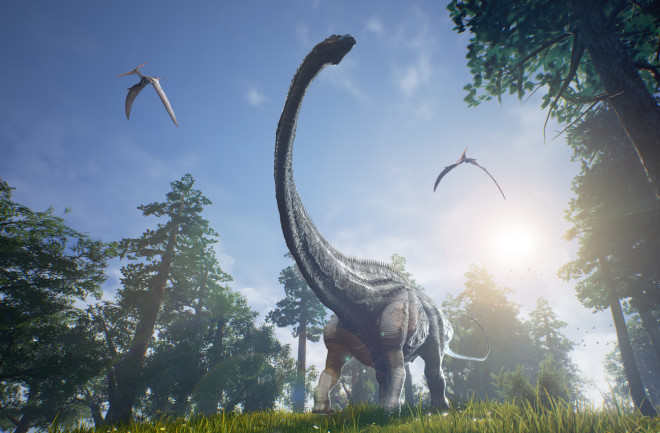 It’s unusual to find dinosaur fossils in Australia; the continent has few mountains and other outcroppings that would reveal the bones.

So when 14-year-old Sandy Mackenzie found what he thought might be a dinosaur bone on his family’s land in South West Queensland in 2004, researchers flocked to uncover a prehistoric world that lay just below the sandy surface. Just two years later, excavations began on "Cooper" — a brand-new species now known as Australotitan cooperensis, aptly nicknamed after nearby Cooper Creek.

“He’s about the length of a basketball court,” says Scott Hocknull, a paleontologist at the Queensland Museum in Brisbane involved in the research. For comparison, the Tyrannosaurus rex measured in at about half that length. “We don’t know exactly how big because we don’t have enough of the skeleton to know for sure, but in comparison to the dinosaurs we’ve found before on the continent, Cooper is massively bigger.”

Although Cooper remains the largest dinosaur ever found in Australia, he’s accompanied by at least a dozen other findings from the Mackenzie land. Piece by piece, Hocknull and his team uncovered a 92-million-year-old world in which giant titanosaurs roamed the continent. The tiny community where the paleontologists unearthed the specimens even came together to build a state-of-the-art facility, the Eromanga Natural History Museum, to house them.

Hocknull is unsure if larger findings are to come, but enormous fossilized dinosaur footprints show the potential is there. Still, this isn’t what interests him the most. “At the end of the day we can go back and forth debating who’s found the largest dinosaur, but that’s not what really matters,” he says. “What I want to know is how these dinosaurs lived in their environment.”

There’s a lot we don’t know about these creatures, but what we do know is fascinating. “We know they hatched from very small eggs and turned into enormous creatures in a very short period of time,” says Hocknull.

Read More: Why One Extraordinary Collection of Dinosaur Embryos Remains Locked Away From Science

Like other sauropods (herbivorous dinosaurs with long necks and tails), titanosaurs possessed tiny heads in comparison to their bodies — evidence that they weren’t particularly intelligent but still capable of masterful feats of survival. According to Jeffrey Wilson Mantilla, a curator at the University of Michigan’s Museum of Paleontology, the sauropods “were able to grow to enormous sizes partially because their spine and tail had a honeycomb structure that was 70 percent air to save weight.”

They likely traveled as far south as Australia when the continents were still connected; then, once the land masses split, the isolated dinosaurs began to diversify. “This would have been an incredibly difficult place for these creatures to survive,” says Hocknull. They lived in a world similar to present-day Australia, with a largely flat topography broken up by large, active volcanos on the eastern coast.

“We’re trying to figure out how you sustain a 60-ton animal in an open floodplain environment,” says Hocknull. “It suggests that there must have been flooding followed by a boom of life and then the dinosaurs would go elsewhere until the next rainy season.”

These findings are outlined in a recent study published in PeerJ. They show that titanosaurs likely covered long distances in search of food, leaving behind tracks that served as their own super-highway of sorts. Similar to how elephants and hippopotamuses mold the land by walking single file over the same tracts, the titanosaurs likely did the same to avoid using up all of their energy.

Wilson Mantilla explains that he was most impressed with the way that Hocknull scrutinized Cooper using high-tech, 3D imaging. “These animals are notoriously hard to study because their bones are both huge and fragile. Not a good combination,” he says. The imaging technology allowed Hocknull and his team to “rotate” the bones and look at every angle without risking physical damage.

The researchers then compared them to similar fossils from other parts of the world, in order to correctly categorize specimen species that may differ in very slight ways. It was a labor of love that took the better part of two decades.

Unfortunately, there’s still an overarching problem that plagues both Cooper and sauropods in general: “It’s nearly impossible to find a whole skeleton because these creatures were so big that their remains would spread far distances,” says Wilson Mantilla. Much of Cooper’s skeletal remains are missing — including the skull, neck and most of the tail. As a result, there’s still a lot researchers don’t know.

But Hocknull is optimistic; he insists that Cooper has unlocked a new paleontological world and opened his mind to the potential things sauropods got up to on the continent. “All of these new ideas come flooding at you once you start excavating these sites,” he says.

Two Asteroids May Have Wiped Out The Dinosaurs

The Late Triassic Mass Extinction and Why Dinosaurs Survived