A 78,000-year-old fossil found on Kenya’s coast suggests that our ancestors interred the deceased with care. 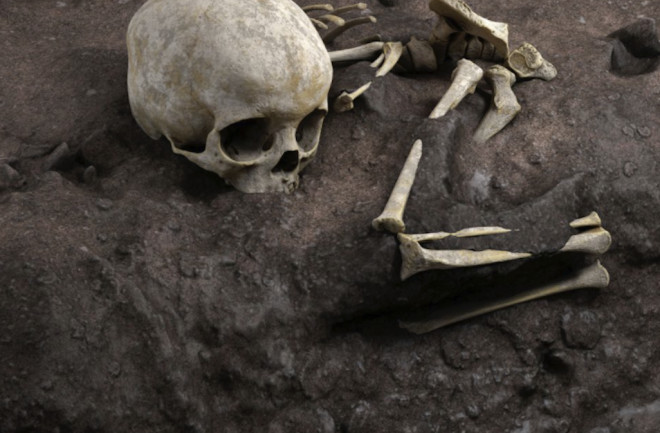 Traveling across Europe in 2018, anthropologist María Martinón-Torres cradled her luggage like a newborn. It held Stone Age cave dirt, cast in plaster and swaddled with packing foam. The bundle had left Kenya for a conference in Germany, and was accompanying Martinón-Torres to Burgos. “I didn’t know at that time I was literally carrying a child in my arms,” she says.

Still, Martinón-Torres could discern two baby teeth peeking out and the white shadow from what resembled a tiny spine. She assumed the dirt contained lost teeth and skeletal bits — the latter highly disintegrated and invisible to airport X-rays.

To expose the powdery remains, her team used the microcomputed tomography (micro-CT) system at Spain’s National Research Center on Human Evolution, where Martinón-Torres is director. Over a year, they applied instruments like dental tools to remove soil without disturbing bone dust. This allowed for crisper CT scans.

The images revealed the bones of a 2.5- to 3-year-old, curled on their side, knees tucked. Certain tooth traits hint the child was male, but this assignment isn’t definitive. At 78,000 years old, the fossil marks Africa’s earliest known burial — a sign that our ancestors developed spiritual beliefs and concern for the dead.

An exciting finding indicates that human ancestors may have placed pillows and animal hide in graves. (Credit: Ceri Shipton/Wikimedia)

So far, researchers have discovered about 30 burials of Neanderthals or Homo sapiens in Europe and the Middle East between 40,000 and 120,000 years old. But these ancient humans likely disappeared without contributing much (in genes or culture) to our direct ancestors.

Meanwhile, our forebears remained in Africa and developed modern innovations like ornamental beads and advanced weapons. Yet, scant evidence exists for funerary rituals during Africa’s Middle Stone Age, 30,000 to 320,000 years ago. Two suspected burials — from a 74,000-year-old South African cave and a 69,000-year-old Egyptian quarry — were excavated decades ago, before state-of-the-art methods arrived.

Now, the Panga ya Saidi Cave dig on Kenya’s coast provides an unprecedented look at humans’ early burial traditions. The excavation began in 2010, when archaeologists sought Indian Ocean trade artifacts. Instead, they found stone tools, shell beads and ochre pigments stretching into the Middle Stone Age, says National Museums of Kenya archaeologist Emmanual Ndiema, who collaborated with scientists from Germany’s Max Planck Institute. In 2013, a tiny bone surfaced and promptly disintegrated. It seemed to come from a pit, packed with sediment that differed from surrounding layers. The team probed the spot for four years before preparing the dirt for lab analysis.

In the May 2021 volume of Nature, Martinón-Torres, Ndiema and colleagues reconstructed the corpse’s funeral and decomposition. They found that ancient people buried the tot around 78,000 years ago, based on when the soil minerals last saw sun. The displaced skull and shoulder suggest that a pillow once propped the child’s head and animal hide shrouded their body, but these items disintegrated long ago. Traces from critters like earthworms and snails indicate they aided decomposition. Eventually, the soft tissue putrefied and left a delicate shadow of a skeleton, now nicknamed Mtoto, the Swahili word for “child.”

After the European excursion, Mtoto returned to National Museums of Kenya and joined the institution’s other fossil hominins — species within the human branch of the ape evolutionary tree. “It’s back with us. It’s been reunited with the other hominins that we have,” says Ndiema.