The half-century anniversary marks the connection that established Mammoth Cave as the longest cave in the world. 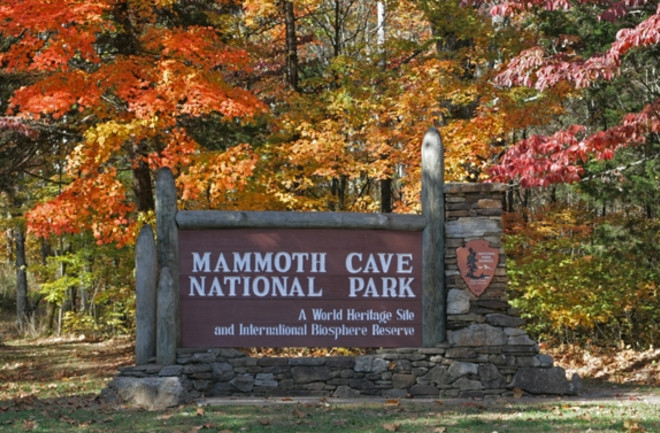 It was the summer of 1972, and Tom Brucker was in a tight spot two generations in the making. His father Roger had created a nonprofit dedicated to the research of caves (aptly named the Cave Research Foundation) alongside colleagues who were exploring the Floyd Collins Crystal Cave in the 1950s — one of the main gateways to the Flint Ridge Cave System. Two decades later, the younger Brucker was squeezing through an extremely narrow passage deep inside Flint Ridge, considered the longest cave system in the world at the time, in an effort to see if it might connect with the similarly spectacular and storied Mammoth Cave system.

In an earlier expedition that summer, cave explorer Patricia Crowther had already made it through the same tight spot — a roughly 35-foot-long passage that stood near the end of what was then thought to be the longest stretch of the Flint Ridge system. Crowther had come to a waterfall tumbling down a pit at the end of the squeeze, but lacked the equipment at the time to continue.

Roger and Tom Brucker returned in a subsequent expedition with others, and Tom was the right dimensions to wriggle through, though it took him half an hour to do so. “My father couldn’t fit through the initial squeeze, so I went through,” Tom says. He then made it down the waterfall and through a winding passage, eventually coming to a river and following it for 500 meters before turning back. Still, that progress was the first step in extending the longest known cave in the world.

The Wrong Way to the Right Destination

The explorers came back again; this time, four of them made it through. But the clock was ticking — for the sake of safety, they had a strict time limit. But they pressed on a little farther, following the river until they arrived at a room where they encountered a signature on the wall inscribed by Pete Hanson — an explorer active decades earlier — next to an arrow.

Cavers usually use these arrows to point the way out of deep passages in case someone gets lost. But this arrow was pointing the opposite way from where Crowther’s team had just come. “We saw that and we were very, very excited, because we know we were most likely in Mammoth Cave,” Brucker says. Crowther continued on until she reached a point where the river came up to the ceiling of the cave. By that point, the cavers were way over their time limit, and they all turned back.

On September 9, 1972, explorer John Wilcox made it through the underground river when he saw that the water level had lowered. He made it through to Echo River, where he could see the Mammoth Cave's main tourist trail. That initial discovery by Crowther and Brucker was now confirmed — the Flint Ridge Cave System, which was already the longest cave system in the world, connected to Mammoth, earning Mammoth Cave the title.

“The world’s longest cave became the world’s even longer cave,” says Brucker, who has spent his life caving just like his father. “Eventually the connection became known as the Everest of speleology.”

Mammoth Cave, named for the size of its historic entrance, has been an important natural wonder since way before European descendants first explored it. Archaeological evidence dating 4,000 to 5,000 years ago shows that Indigenous people had explored more than 19 miles of passages in the system, mining gypsum and leaving petroglyphs. Researchers and explorers have also found naturally mummified human remains buried within parts of the cave.

Mammoth Cave's historic entrance is a natural opening that has been used by humans for 5,000 years. (Credit: NPS)

In the 19th century, African Americans also played important roles in exploring new parts of the cave. A slave, Stephen Bishop, worked as a guide at Mammoth from 1838 to 1856, discovering unmapped areas of the system, such as that around the so-called “Bottomless Pit.” Although these accomplishments went unrecognized at the time, pioneers like Bishop helped spark a golden era of cave exploration.

More than a century later, in 1969, Mammoth Cave received official designation as the world’s largest cave, with about 65 miles explored at the time. Explorations of Flint Ridge quickly put it past Mammoth in the next couple of years — by 1972, explorers had recorded at least 86.5 miles of passages in Flint Ridge. But the caves weren’t that far apart: The entrance to Mammoth Cave, for example, lies only a few miles as the crow flies from the Floyd Collins Homestead, a cabin used as a base to explore Flint Ridge.

Mammoth Cave is also important ecologically, the home to more than 130 species of wildlife. Today, the site is designated as a UNESCO World Heritage Site. “The park has also one of the highest subterranean biodiversities worldwide, with 41 species of cave-adapted organisms,” according to their website.

Stalactites and stalagmites line the floors and ceilings of Mammoth Cave. (Credit: NPS)

By 1972, Mammoth Cave National Park stretched across more than 57 miles, including all of its side passages. Flint Ridge, meanwhile, extended more than 160 miles. Today, further explorations have stretched the numbers of the whole combined system to close to 420 miles. None of this is a straight line — Brucker says that all of these passages, which split off and run parallel, under, over and in every direction underground, fit inside an area that is currently about 32 square miles. Beyond that, about 30 percent of the cave passages stretch past the boundaries of the national park.

Another Half Century of Exploration

It’s possible that another 130-mile system nearby, the Fisher Ridge Cave System, connects to the combined Mammoth Cave system, but that has yet to be confirmed through exploration, Brucker says. If the caves were connected, that would put the total system at about 550 miles.

Given that it’s been a half century since the connection between Mammoth Cave and Flint Ridge was found, Brucker says that it's easy to imagine all of the caves within the systems have all been explored. But the reality is far from it. “We’re no closer to being done today than we were back then,” he says. “The legacy is that you can continue this process for another 50 years.”

The Pictures That Saved Yellowstone