Researchers say that these trees are evidence of early crop cultivation by ancient humans in Amazonia. 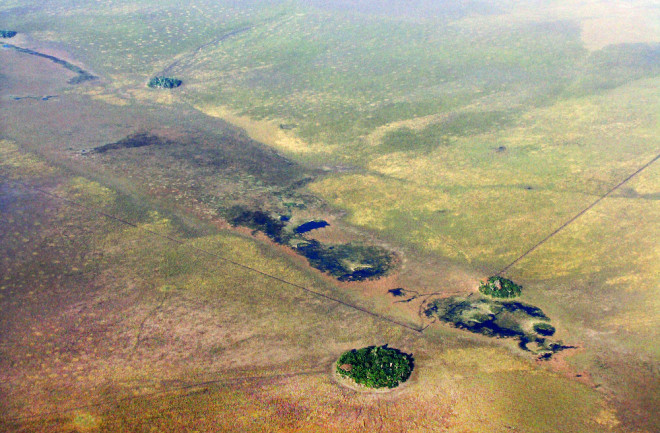 An aerial shot of the Llanos de Moxos region in South America shows the strange isolated mounds of trees that grow among expansive grasslands. Scientists’ explanation for these islands: Ancient humans planted and cultivated crops, making them some of the oldest domesticated plants in history. (Credit: Umberto Lombardo)

This article appeared in Discover’s annual state of science issue as “Forest Islands Amid a Grassland Sea.” Support our science journalism by becoming a subscriber.

Every spring, rains and snowmelt swamp vast grasslands that stretch between the Andes Mountains and Amazon rainforest in northern Bolivia. But thousands of tree-covered mounds stand solid, several feet above the flooded grasses.

“They are like islands in a sea of savannah,” says Umberto Lombardo of the University of Bern, Switzerland. In 2006, Lombardo first stepped onto a forest island in this Llanos de Moxos region, puzzling over how such features could form naturally. “As a geographer, I had absolutely no explanation for them,” he recalls.

One theory suggested that over the past few centuries, ranchers had carved away lush rainforest to create pastures, but left scattered groves of about 300 trees each. Yet that didn’t explain why the trees grew on higher ground.

It turns out the forest islands were made by people, and are much older than suspected. Lombardo and colleagues pieced together the history, published in May in Nature: Roughly 10,800 years ago, humans cultivated crops in the Llanos de Moxos — which puts them close in age to the oldest known domesticated plants, cultivated in the Middle East about 12,000 years ago. This confirms Amazonia as one of the first places on Earth where people domesticated wild species.

Their gardens piled up fertile compost, which allowed trees to root above the seasonal flood line. Rather than wrecking the environment, the artificial forest islands enhanced biodiversity, providing habitat for rare species to this day. Lombardo “is a real hero in this … really pushing research,” says José M. Capriles, study co-author and archaeologist at Penn State.

In 2012, he and Lombardo launched excavations, which confirmed that three mounds were made by ancient people, based on burned clay, food scraps and human burials found at the sites. For the new study, Lombardo used Google Earth to map 6,643 forest islands in a region about the size of Illinois. “It was like a Zen activity just surfing and clicking on all these points,” he says.

The researchers probed some and found archaeological debris similar to the fully excavated sites in 64 out of 82 of the tested mounds between 2,300 and 10,850 years old. From that ratio, they estimated humans erected at least 4,700 of the 6,643 forest islands visible on Google Earth.

In the probes, the team also identified microscopic plant remains from the oldest-known squash in Amazonia and the oldest-known crops of the tuber cassava (also known as manioc or yuca) in the world, as well as nearly 7,000-year-old corn — a plant domesticated about 2,000 years earlier in Mexico. It seems people passed seeds from one community to the next, spanning over 2,000 miles from Central to South America.

The new data also suggests an 8,000-year gap between the start of garden-scale cultivation and full-blown agriculture with canals, fields and dependence on domesticated species. Elsewhere in the world, this shift happened over approximately 1,000 years. Next on Lombardo’s research agenda: understanding why it took so long in Amazonia.