This Patient Was Already Battling Organ Failure. Was He Having a Heart Attack, Too?

He was already unconscious when the alarm went off. But what first seemed like a classic heart attack turned out to be anything but. 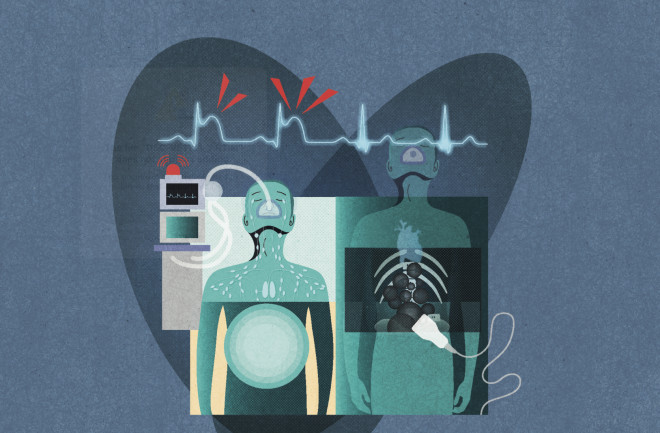 The symptoms that brought Louis to the Keck Hospital of University of Southern California seemed less than concerning at first glance. The 41-year-old said he’d been feeling weak and short of breath for the past three weeks, and his feet were swollen.

But vague symptoms can sometimes conceal life-threatening dangers. Soon after arriving, Louis spiraled into respiratory distress, spurring doctors to rush him to the intensive care unit and place him on mechanical ventilation. There, a rapid-fire series of diagnostic tests revealed an escalating crisis: Louis had lymphoma, a cancer that affects the body’s pathogen-fighting lymphatic system. Unnoticed, the cancer had spread, eventually sending him into shock as his organs began to shut down.

Soon after, several young doctors heard an alarm for the hospital’s cardiology unit. It was Louis. Unconscious and already fighting for his life, Louis was now facing another dire prognosis: The electrocardiogram monitoring his heart had flagged a possible heart attack.

Hartaj Girn, at the time a senior cardiology fellow at USC, moved quickly, preparing for a potentially life-saving trip to the cardiac catheterization lab. There, doctors could open his blocked artery before too much damage occurred.

The emergency the team thought they were responding to, called an ST-segment elevation myocardial infarction, or STEMI, is one of the most serious crises for a patient. “Generally, if there’s a STEMI patient, it needs to be addressed very urgently. It’s a really severe heart attack,” Girn says.

A STEMI is usually distinguished by a characteristic aberration on the reading from an EKG machine, which measures the electric activity of the heart muscles. Where there should have been a flat line on Louis’s EKG monitor, there was now a marked upward swoop — a classic STEMI.

An EKG reading like Louis had is normally all a doctor needs to authorize a catheterization procedure. A probe is inserted into a patient’s veins and used to clear out the blockage that’s starving the heart of life-giving oxygen. In making the decision, doctors are keenly aware of cardiology’s golden rule: “Time is muscle.” Every second that slips away while a patient is having a heart attack means more dead tissue and a progressively worse prognosis. During a STEMI, erring on the side of caution is almost always a good idea.

But something made Girn pause. After three years in the organized chaos of a rapid-response cardiology unit, he’d learned to recognize a classic heart attack patient. And something didn’t add up.

Though he was seriously ill, Louis, a man in his early 40s, had no real history of cardiovascular problems. And his vital signs, apparent STEMI aside, didn’t scream “heart attack,” either. Doctors would normally be able to help address the confusion with a few questions to a patient, but Louis was sedated by powerful drugs — he wasn’t waking up any time soon.

Thinking quickly, Girn asked for an ultrasound machine to get a better look at Louis’ heart. By using a probe that emits sonic waves, an ultrasound can reproduce a moving image of the body’s interior. A heart in crisis will often move sluggishly on one side, starved of oxygen. But Louis’ heart looked fine.

Girn moved the probe down, to get a look at the heart from below. He pushed on Louis’ abdomen as he did, noting how oddly swollen it was. But that peculiarity vanished from his mind as one of the residents in the room pointed out something else strange: Louis’ EKG reading, which had brought them all running just minutes before, had suddenly returned to normal.

Girn was dumbfounded: “STEMIs don’t go away with putting a probe on somebody’s chest.” He recalls thinking to himself jokingly, “I cured a STEMI with my hands.”

Puzzled, he lifted the ultrasound probe off of Louis’ stomach. What had initially appeared to be a STEMI flashed back onto the screen, just as before. Girn repeated the motion a few times — watching what looked like a heart attack appear and disappear before his eyes.

It was something without any real precedent, but, Girn says, it made one decision easier. He cancelled the cath lab transfer, confident that Louis wasn’t in immediate danger.

But that didn’t clear up the bigger question: If it wasn’t a heart attack, what was going on?

Girn went back to the cardiac cath room and gathered his team, including the attending cardiologist, Enrique Ostrzega, for a brief conference. They knew that, in some rare cases, what appears to be a STEMI can actually be caused by something else — odd EKG readings might be the result of pneumonia, pancreatitis, intestinal bloating and a few other things.

Ostrzega knew almost immediately that Girn made the right decision in keeping Louis out of the cath lab. A cardiac catheterization isn’t an especially dangerous procedure, but a small percentage of patients still risk bleeding, stroke and kidney damage. And Louis, whose organs were already compromised, was at special risk from the contrast dye doctors inject during the procedure to check blood flow.

“This contrast agent could have made his kidney failure even worse,” Ostrzega says. “So the price to pay for a procedure that is inadequate, or for the wrong diagnosis, is not minimal.”

But Louis was still in serious danger, as his body struggled to survive even with the help of modern medical technology. It was imperative to figure out this new wrinkle, fast.

Ostrzega focused the team on Louis’ abdomen. They knew it was severely swollen from an ileus, in which the normal movement of the gut comes to a standstill. It’s not an uncommon occurrence on patients who are seriously ill. The ileus was causing gas to back up throughout his gastrointestinal tract, distending his abdomen. The doctors recalled a few scattered reports that mentioned odd EKG readings as the result of gastric distention, a clue they could be on the right track. But there was nothing in the medical literature that explained exactly what they were dealing with.

Next, the team reviewed an abdominal X-ray that had been done shortly before. Large dark blobs floated in the middle of Louis’ gut, indicating empty space in the negative coloration of an X-ray. The pressure was so severe, in fact, that his internal organs had been pushed around inside his abdomen, displaced by the gas pockets. Could this be what was affecting his heart?

To test their hypothesis, the cardio doctors had the ICU team release the trapped air using a nasal tube. Sure enough, Louis’ EKG reading went back to normal. The supposed heart attack was nothing more than a bad case of bloating.

When food passing through the intestinal tract gets blocked, it can cause gas to back up in the abdominal cavity. The bloating can be severe, so much so that some patients can appear to be pregnant. An ileus occurs when the intestines lose the ability to contract and keep food moving through. They can occur after surgeries on the intestines, as a side effect of powerful opioid pain relievers, or in patients like Louis, whose bodies are beginning to shut down.

The cure for abdominal bloating, thankfully, is usually simple. A tube inserted into the intestines through the mouth or nose is typically enough to release the trapped air.

For Girn, it was a lesson in trusting his instincts. “Everything didn’t add up the way it often does,” he says. That sliver of subconscious doubt made him take a step back, adding crucial seconds that ultimately led to the right call. The cardiology team wrote up their patient’s case in the Journals of the American College of Cardiology, possibly the first-ever report of a physical maneuver directly reversing STEMI elevations on an EKG.

Though Louis benefitted from the doctors’ speedy diagnosis, it’s an unfortunate reality that simply solving a medical mystery isn’t always enough to save someone’s life. Louis ultimately succumbed to his lymphoma. But Girn’s instincts and rapid action spared his patient from an unnecessary invasive procedure that could have added to Louis’ distress. And the case is an important addition to the body of medical knowledge.

“Things aren’t as clear-cut as I thought before,” adds Girn. Now, he’s learned that “regardless of how little time you feel you have for a decision, look at the patient and try to make clinical sense of it.” Those few moments of thought might end up making all the difference.

Nathaniel Scharping is a freelance science writer based in Tacoma, Washington. The cases described in Vital Signs are real, but names and certain details have been changed.