Humans Aren't the Only Animals That Kiss

Smooching occurs across species and in a variety of ways, but the romantic context may be exclusive to humans — and isn't consistent in all cultures. 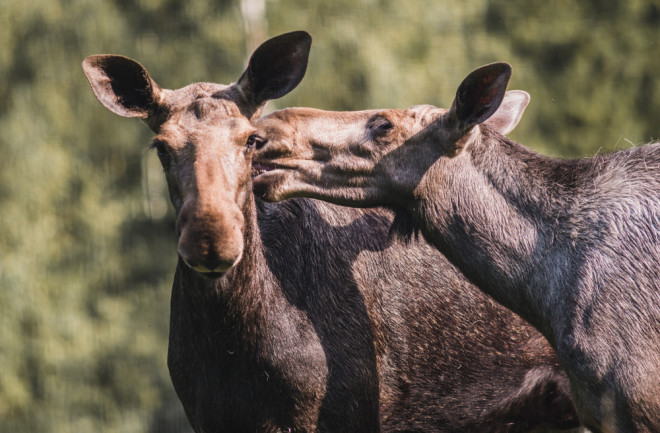 When Charles Dickens wrote that “Man is the only animal that knows how to kiss,” he seems to have gotten the facts wrong. A simple Google Images search for “animals kissing” will turn up millions of hits. In fact, you can find plenty of examples in nature: moose and ground squirrels “brush noses”; turtles “tap heads”; many species of bats even use their tongues during courtship, writes Sheril Kirshenbaum in The Science of Kissing: What Our Lips Are Telling Us.

But since behavioral scientists can’t pinpoint the emotional significance of animal smooches, we can’t assume they do it for the same reasons as us.

Some researchers speculate that the broad spectrum of kisses, nibbles and nuzzles is adaptive. Since reproduction requires a level of closeness, the evolution of kissing, in all its varying forms, may help to ensure a species’ survival.

That said, our method of lip kissing is pretty much unique to humans. While research by famed chimpanzee researcher Jane Goodall suggests that “Chimpanzees communicate much like humans do — by kissing, embracing, patting on the back, touching hands, tickling,” their kisses are different than human ones. While they do kiss with their lips, their smackers are narrower and don’t turn out like ours do. Researchers speculate that this anatomical difference could mean that kissing for chimps is not particularly intimate, but rather an expression of connection like the human hug.

As it turns out, bonobos are also big kissers. “Bonobos are known as the most amorous of great apes,” Kirshenbaum writes in her book. “They often use sex rather than aggression to resolve conflicts in their female-governed society. They kiss for reassurance, and to firm up their relationships with other members of the community.” It’s been reported that bonobos are among the most prolific kissers — they have been reported kissing and nibbling for up to 12 minutes straight.

So, Why Do Humans Kiss?

From an evolutionary standpoint, scientists think canoodling helps us smell and therefore assess potential mates. Because other animals have more sensitive noses, it's possible that they don't need to get quite as intimate as we do (which could explain the lack of kissing for sexual pleasure in other species).

But sniffing isn't always helpful enough for humans to judge mates, which is why spit is important. This is especially true for females: “Women in particular value kissing early on,” the authors of a 2014 Evolutionary Psychology study wrote. “Saliva is full of hormones and other compounds that may provide a way of chemically assessing mate suitability — that’s the biological brain stepping in.”

The exchange of saliva during kissing may even have biological consequences, earlier research suggested. A 2007 study, also published in Evolutionary Psychology, showed that men were more likely than women to initiate open mouth and tongue kissing. A possible explanation: Male saliva contains testosterone, a sex hormone that that can affect their partner’s libido. Romantic kissing may have evolved into a courtship behavior with a number of functions, including sizing up mates, initiating sexual arousal and maintaining bonds with a partner.

While fewer than half of all the surveyed cultures engage in romantic kissing, the authors concluded that kissing likely serves a purpose beyond sexual arousal: It allows us to learn about a partner and determine whether we experience a “chemical attraction” — or even basic compatibility.

Scientists Debate Why Childbirth Is So Brutal