Could the first 'click chemistry' treatment for cancer patients, which is already in Phase 1 clinical trials, reduce the side effects associated with chemotherapy? 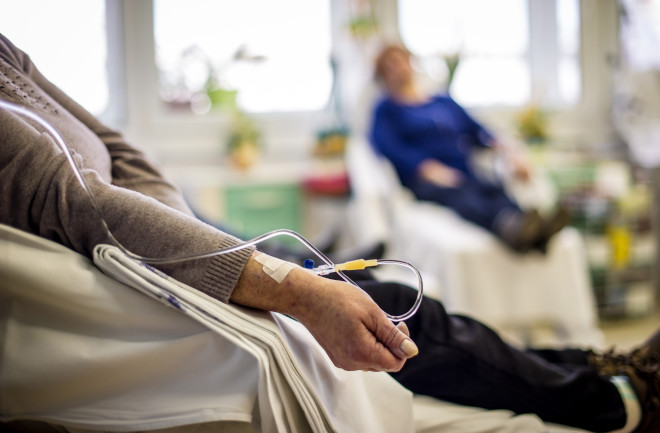 Picture this: A chemotherapy drug courses through a patient’s veins, ready for action. The enemy tumor is in sight, fast approaching … but suddenly the toxic drug is whisked away, carried to an unsuspecting part of the body. It attacks wherever it can.

Of all the drug molecules administered to our bodies, only a small fraction reach their intended locations. For this reason, scientists have long been interested in developing site-specific drug delivery systems — especially for cancer treatments that can unintentionally damage healthy cells. Such targeted chemotherapy strategies leverage biological differences between cancerous and normal cells; for example, researchers have designed drugs that bind to the unique proteins on some cancer cells. Not all tumors, however, have these distinguishing features.

Researchers from the University at Albany and Shasqi, a biotechnology company based in San Francisco, recently developed a chemistry-powered strategy to selectively deliver chemotherapy drugs to a broader range of tumors. Their approach, which has shown promising results in animal studies and is currently being tested in a Phase 1 clinical trial, is to anchor one chemical reaction partner at the tumor and attach the other to the drug itself. When the two chemicals find each other in the body, the resulting reaction frees the drug right at the tumor site.

This type of reaction requires a special chemical couple — any old molecules that are happy to react in the lab, where they have few other options, can become sidetracked by the plethora of prospects inside the body. “There are not many reactions that are known where you can combine two things together inside a live system, which has many different factors that will interfere with the vast majority of other organic reactions,” says Maksim Royzen, a professor of chemistry at the University at Albany.

Fortunately, there are a few so-called biorthogonal click chemistry reactions that occur efficiently (and selectively) in complex environments like the human body. “Reagent A and reagent B love reacting with each other, and they ignore the rest of the world,” says José M. Mejía Oneto, founder and CEO of Shasqi.

The researchers selected tetrazine and trans-cyclooctene, one such “honeymoon-phase” chemical pair, for their latest drug delivery system. First, they injected a gel-like substance containing tetrazine into a tumor (tumors in most parts of the body can be accessed by a needle, explains Oneto). Then they administered a combination of trans-cyclooctene and the chemotherapy drug into the blood. This inactive combo harmlessly circulates within the body until it encounters the gel at the site of the tumor — when the reaction between click chemicals sets the drug loose.

For the drug, the team chose doxorubicin, a chemotherapeutic that’s effective against 14 types of cancer, according to the FDA. Its toxicity doesn’t stop at the tumor, however — doxorubicin is so damaging to the heart that it’s earned the nickname “the red devil” and an upper limit to the total amount a person can take. “People usually get between six, seven, maybe eight doses over their lifetime before the risk of heart failure becomes so large that people stop using it,” says Oneto. The ability to localize doxorubicin at the tumor could reduce its dangerous cardiovascular side effects.

Of Mice and Men

The researchers tested their doxorubicin delivery strategy in mice in a 2021 Advanced Therapeutics study. They found that the vast majority of the drug accumulated at the tumor, allowing the mice to tolerate the compound at a six-fold higher dose and live 20 days longer than with treated with regular doxorubicin. Interestingly, the therapy also produced an immune response that attacked even tumors that hadn’t been injected with the gel.

Shasqi is now testing the doxorubicin system in patients with solid tumors in soft tissues in a Phase 1 clinical trial, marking the first click chemistry-based treatment used in humans. At this stage, the researchers are gradually escalating the dose of the compound to evaluate its safety. Preliminary results show that the drug is indeed being activated at the tumor — and is tolerated at almost nine times the normal amount of doxorubicin per cycle.

“We're getting a large amount of drug for a prolonged period of time with fewer side effects,” says Oneto. While signs of heart damage can take time to develop, the researchers haven’t yet observed any concerning cardiovascular effects in their patients.

The trial consists of a small number of people with no control group, but participants can be compared to their past selves. Some patients’ cancer, which continued to progress even after traditional chemotherapy, has stabilized for several months now. And for some participants, both tumors that were and were not injected with the gel are being held at bay. While the data is still being evaluated, this effect could be the result of an immune response elicited by the drug.

The team of researchers plans to more rigorously evaluate its proprietary delivery system — called Click Activated Protodrugs Against Cancer — in a future Phase 2 clinical study and ultimately adapt it to other chemotherapeutics. Drug candidates must be minimally toxic, stable in blood and dissolvable in physiological solutions after attaching to the click reagent.

The work is an exciting demonstration of the feasibility of click chemistry approaches in the human body, says Balyn Zaro, a professor of pharmaceutical chemistry at the University of California, San Francisco who was not involved in the research. Although it’s difficult to draw conclusions about its effectiveness at this stage, the strategy is promising and could be used to revisit drugs that have been abandoned due to toxicity issues, she adds.

“Biorthogonal chemistry is one chemistry that we’re trying to show can make a real difference in healthcare,” says Royzen. “I’m excited that hopefully we can demonstrate that it can hold therapeutic promise.”

Taking A Closer Look at AI and Disease Diagnostics