Doctors Spend Years on Cause of Infant's Stroke, Mysterious Illness

Hair loss, cysts and a host of developmental delays were all symptoms of something bigger. 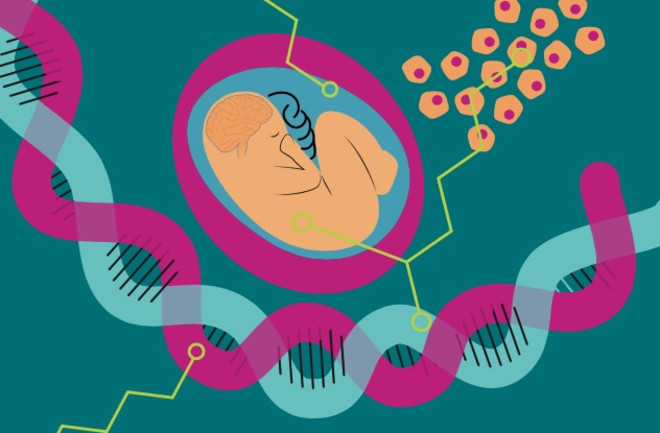 Marley’s mother had a relatively normal pregnancy, and her birth went smoothly in 2015. But it was clear almost immediately that “things were not right, and we didn’t know why,” says her mother, Kelly. For starters, Marley couldn’t regulate her body’s temperature or blood sugar levels. She was born with a head full of silver hair, but within a few days it all fell out, chunk by chunk. Later, she grew cysts on her newly-hairless head.

Marley was whisked away to the neonatal intensive care unit (NICU), where she spent the first month of her life. While she was there, doctors found signs that she had suffered cerebral hemorrhages, a type of stroke, on both sides of her brain. Perinatal strokes — strokes that occur late in pregnancy or early in an infant’s life — occur in about 1 out of every 2,700 pregnancies, but doctors had no idea what caused Marley’s. Her parents quickly noticed that Marley was developmentally delayed in the NICU, and once they took her home, she continued to miss major milestones. She didn’t develop the strength to sit up. Several months later, she still had no hair and frequently developed cysts.

Marley started seeing a neurologist, but even the strokes couldn’t explain all of Marley’s symptoms. Sure, strokes could damage the brain and harm her overall development, but what about the hair loss? The cysts? “Our neurologist pushed us to seek some answers,” says Kelly. “She recommended we see a geneticist.”

So, when Marley was 11 months old, her parents took her to see Caleb Bupp, a medical geneticist at the Spectrum Health Helen DeVos Children’s Hospital in Michigan, not far from where the family lived. Unfortunately, at the time, Bupp had no idea what was responsible for her condition. Marley underwent a series of genetic tests, which identified two mutations. The doctors quickly ruled out one and focused on the second, in her ODC1 gene. The ODC1 gene encodes an enzyme that regulates polyamines, small molecules involved in cell growth throughout the body.

Even this, though, didn’t give the team any useful information about Marley’s condition. To their knowledge, no one had ever had a mutation in these genes that caused any kind of genetic disorder before. “There was no known disease for [the mutation we found],” says Bupp. “And it went in a drawer, as it sometimes does with rare diseases.”

About six months later, André Bachmann, a pediatric researcher at Michigan State University who specializes in using drugs to target polyamine dysfunction seen in certain cancers, visited the hospital to give a lecture on polyamines. It didn’t click right away, but about a month later, as Bupp was reviewing Marley’s file he recognized that word: polyamine. A mutual colleague then set up a call between Bupp and Bachmann.

“The call blew me out of my socks,” says Bachmann. Bachmann doesn’t just study polyamines; he specializes in studying the specific ODC enzyme that regulates polyamines. But despite having researched that enzyme for nearly three decades, Bachmann had never seen a human born with a mutation in the ODC1 gene that had caused symptoms. The call “was our eureka moment,” says Bupp.

Polyamines play a vital role in the inner workings of our cells (some of which are listed above). But it’s possible to have too much of a good thing: In Marley’s case, for example, an overproduction of polyamines harmed the growth of her hair follicles. (Credit: Kellie Jaeger/Discover)

Today, Bachmann studies molecular biology and polyamines in humans. Within our bodies, polyamines are ubiquitous, involved in almost all cellular processes, including growth and differentiation. Some research has linked their dysregulation to a heightened risk of cancer. Another study suggests that when polyamines are functioning normally, they may protect people from neurological disorders like epilepsy and mental illness. But if there aren’t enough of them, or they aren’t functioning normally, the risk of both increases.

Following Bachmann’s phone call with Bupp and the team’s formation, there wasn’t a lot to go on. But Bachmann remembered that in 1995, a colleague who was hoping to learn more about how polyamines affect development in humans had created a mouse model with a hyperactive ODC1 gene only in the skin. Those mice had two things in common with Marley: They lost their hair and cysts formed on their bodies.

Next, scientists working with the mouse model treated these mice with difluoromethylornithine (DFMO), a drug that was already approved to treat a parasitic disease called African sleeping sickness and is known to quiet excessive polyamine activity. The mice started growing hair again. Since the drug had been in use for decades and had a reasonable safety profile for both adults and children, the team requested approval from the FDA to try it on Marley; it was granted soon after.

Following her first treatment at age 4, Marley stopped getting cysts. Blood samples showed that her polyamine levels were decreasing. And things just kept improving. Right before Christmas in 2019, a month after treatment started, Marley started growing eyebrows for the first time. When Kelly noticed the slight, thin hairs on Marley’s face, she ran for her camera.

In June 2020, another patient, Jameson, was diagnosed with BABS. He, too, had brain bleeds at birth, though not as severe as Marley’s. Jameson was born with hair but, like Marley’s, it quickly fell out. Initial genetic testing didn’t provide any answers, so a geneticist suggested that the family reach out to the Undiagnosed Diseases Network, an NIH-funded effort to bring scientists together and give answers to patients with conditions that have perplexed their doctors. Unfortunately, due to delays related to the COVID-19 pandemic, it took about a year for Jameson’s family to get the diagnosis. By then, he was 5 years old.

“When you google Bachmann-Bupp Syndrome, Marley came up,” says Jameson’s mother, Kayla. “Then it hit me, ‘There’s someone else out there that’s just like my son.’ ” One year later, Jameson and his family traveled from California to Michigan, where he received his first dose of DFMO. Marley and her family even visited the hospital to support him before his treatment, which went well.

Still, for the researchers, plenty of questions remain. Polyamines are “involved in every process of the body,” says Bupp. The scientists wonder if the genetic mutation affected Marley’s development in utero, and if that was responsible for the hemorrhages she and Jameson experienced. “There’s no way to go back and look at that now, but it is a theory that we have,” says Bupp. “What if we had treated her at 2 years old, or at birth? What if we could have treated prenatally?”

Today, 7-year-old Marley has a full head of hair. She may not talk and play like a typical 7-year-old, but accomplishments like learning to scoot across the floor are huge for her. “The magic started to happen” as soon as the therapy started, says Kelly. “She’s able to move around now, which she couldn’t even sit up on her own before we started medication.” Marley even has eyelashes now — something her mother says she never had before. And while she still doesn’t talk, with a few hand signs, she’s learned to start communicating with her family.

What is the Purpose of Hiccuping?

More From Discover
Health
Is Vitamin C Actually an Effective Cold Remedy?
Mind
What Is Emotional Blunting, and Do Antidepressants Cause It?
Health
What New Variants Of COVID-19 Are Currently Circulating?
Health
Why Eating Disorders Are so Difficult to Treat
Health
The Origins of Organ Transplantation
Health
Beer Hops May Fend Off Alzheimer’s
Recommendations From Our Store
My Science ShopDiscover STEM Kits
My Science ShopDiscover 2022 Calendar
My Science ShopStrange Science
My Science ShopElements Flashcards
Shop Now
Stay Curious
Join
Our List