A variation of the familiar Delta-9-THC compound is growing in popularity among savvy cannabis consumers. But its legality is sticky. 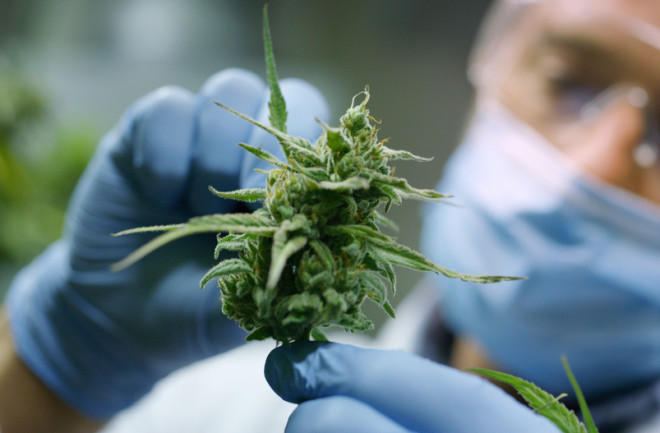 Delta-9-THC, the main drug in cannabis plants that gets people high, can also be a potent medicine. It can treat extreme nausea and stimulate appetite, which is especially helpful for people who have HIV or are going through chemotherapy. A synthetic version of THC, called Dronabinol, has been used to treat these conditions since the 1980s, although some people prefer their THC to come from the plant itself.

But while marijuana is a relatively mild drug with few side effects — at least, compared to alcohol or tobacco — too much Delta-9-THC has its downsides. It can sometimes spark paranoia and anxiety or trigger dizziness and headaches. And it’s worth noting that much of the cannabis sold legally in the U.S. contains a high THC concentration.

That’s why many cannabis consumers are turning to an obscure analogue of Delta-9-THC called Delta-8-THC. The difference between Delta-8 and Delta-9 is subtle: Both will get you stoned, but the former is about half as potent as the latter. Many people claim that Delta-8 is a smoother, less anxious psychoactive experience than the more familiar Delta-9. It also seems to have additional medicinal effects than regular THC, such as better pain relief, but these claims have yet to be weighed out in clinical trials.

Based on these anecdotal reports, Delta-8 is quickly becoming a trendy new cannabis product, appearing in products like vape cartridges, soft drinks, gummies and tinctures. The rise in popularity mirrors the CBD (cannabidiol) craze before it and, like with CBD, there still isn’t a lot of quality control for products or evidence to back up anecdotal accounts. Many of the same positive claims are made about Delta-8 products — though scientists have yet to study their effects in depth.

The cannabis plant is essentially a factory for dozens of different compounds called cannabinoids. The two most popular are also the most abundant: Delta-9-THC and CBD.  But the plant also makes many other so-called minor cannabinoids, including CBG, CBN, THCV and, of course, Delta-8-THC. Most cannabis plants produce very small levels of Delta-8, so to get a usable amount takes a lot of processing and refinement. However, Delta-8 is more shelf-stable than Delta-9, which could make it a better option for prescription drugs.

So that’s it? Could the shift in a single carbon bond really cause such a difference in experience? Based on the limited science available, the answer seems to be yes.

“I think it's been shown that there's a difference,” says Peter Grinspoon, a primary care physician at Harvard Medical School who specializes in medical marijuana. “People report [Delta-8] as being less anxiety-provoking, less sedating and a little more clear-headed than THC.”

Grinspoon is a board member of the advocacy group Doctors For Cannabis Regulation, which seeks to provide patients with evidence on the pros and cons of medical marijuana. He says Delta-8 has game-changing potential for patients, such as the elderly or children, that are looking for “less confusion and spaciness or stonedness or whatever you want to call it.” But he cautions that the alleged benefits of cannabis-based drugs shouldn’t supersede the evidence.

“Whenever there's another minor cannabinoid that people start puffing up, I always worry that the marketing claims and the desire to line people's pockets is going to outpace the actual science,” Grinspoon says.

“The research isn't there yet to know for sure,” Peterson agrees. However, he does note that Wunder did extensive tests to rule out the placebo effect in their products.

But before the market for Delta-8-THC products can get anywhere close to the current demand for CBD, entrepreneurs and doctors need to know: Is it even legal?

Delta-8 has a complicated, hazy legality. There’s no question that Delta-9 is highly illegal: Under U.S. federal law, regular THC is a Schedule I substance, which means the government classifies it as dangerous as heroin and LSD. This law, which was passed in 1970, makes research on cannabinoids expensive and difficult — part of why we know so little about Delta-8.

But there was no explicit law banning Delta-8 until this August, when the U.S. Drug Enforcement Administration (DEA) updated their list of controlled substances. A lot of the confusion stems from where Delta-8 is sourced. If it comes from Cannabis sativa, it’s definitely illegal. If it comes from hemp — a form of the same plant, bred with nonintoxicating levels of THC — then it’s legal thanks to the 2018 Farm Bill. Or, so a lot of cannabis companies assumed.

“The entire industry … was assuming it was legal due to it being derived from hemp,” says Ryan Cassell, co-founder and chief scientist of Crystal Creek Organics, a cannabis company based in Pensacola, Florida. “The laws clearly define all hemp-derived cannabinoids and products with a Delta-9-THC level below 0.3 percent as legal.” But shifting, ambiguous laws have some in the industry concerned about a DEA crackdown on hemp farms, according to Marijuana Moment. The convoluted mess of regulations since hemp was legalized has forced the USDA to reopen a public comment period to address some of these changes and the impact they have on the industry.

“We shall see how all of that plays out in the coming months,” Cassell says. “As for now, our company has had to take a step back [from production] and wait for further clarification surrounding the laws and legal status of Delta-8.”

In the meantime, it’s not clear what the future holds for Delta-8. Consumers definitely seem eager to try new, obscure cannabinoids, say both Cassell and Peterson, but whether they can legally purchase them outside of states where recreational cannabis is legal, or whether scientists can easily study them, is still being smoked out.

More information on Delta-8 and purchase options can be found here.

Calorie-Restricted Diets May Not Live Up to the Hype

6 Ways to Exercise Outdoors in Winter