Relief probably isn’t coming in the short run, but we can keep things from getting worse in the long run by tackling global warming. 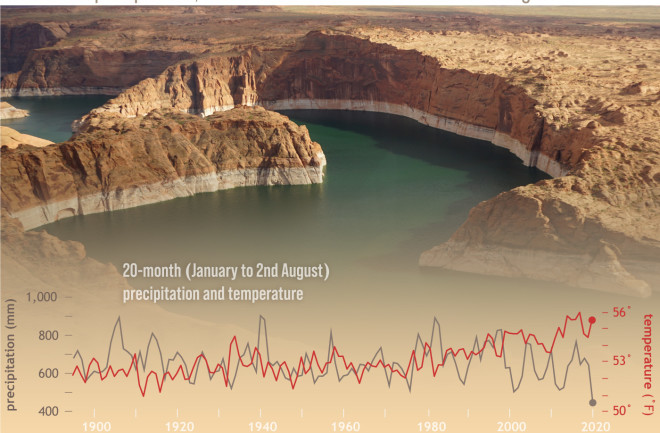 Over the 20-month period from January 2020 through August 2021, the U.S. Southwest received the lowest total precipitation and had the third-highest daily average temperatures since 1895. In this graph, cumulative precipitation for all 20-month periods since 1895 is shown by the brown line, and average temperature is shown in red. (Credit: Climate.gov. Photo of low water levels in Lake Powell on August 13, 2017, by Flickr user Edwin van Buuringen, used under a Creative Commons license.)

If you're one of the more than 60 million people living in the U.S. Southwest, you probably have at least an impression of the unusually dry and warm conditions that have drained reservoirs and spurred raging wildfires in recent years.

Now, a new report shows just how bad it has been.

From January 2020 through August 2021, Arizona, California, Colorado, Nevada, New Mexico, and Utah experienced the lowest total precipitation, and the third-highest daily average temperatures, ever recorded since 1895. Together, these dry and hot conditions have "imposed an unyielding, unprecedented, and costly drought," according to the report, released on September 21st by a task force of the National Oceanic and Atmospheric Administration.

The task force researchers found that much of the lack of winter precipitation could be explained by natural factors, including the La Niña climate phenomenon. This helped shift winter storms away from the west coast. The very dry summer monsoon in 2020 is not as well understood, they said.

As for the unusual warmth, it is unequivocally tied to our emissions of carbon dioxide and other greenhouse gases.

As the report notes, "exceptionally warm temperatures from human-caused warming have melted snowpack and drawn water from the land surface more rapidly than in previous years. The warm temperatures that helped to make this drought so intense and widespread will continue (and increase) until stringent climate mitigation is pursued and regional warming trends are reversed."

The new report adds to previous scientific research that used tree-ring records to look much farther back into the past than 1895. With these indirect "proxy" records, scientists had previously shown that the period between 2000 and 2018 was the driest since the late 1500s. About 40 percent of the severity of this “megadrought” was attributed to anthropogenic climate change.

The NOAA task force report differs in that the researchers used actual instrumental records of weather, not the indirect and less precise measure of trees rings.

Writing in the Washington Post, five of the authors said the 20-month drought they documented "was intensified by extreme temperatures fueled by climate change that dried out soils, rivers and vegetation. It is projected to cause tens of billions of dollars in impacts."

In 2020 alone, economic losses from the drought and wildfires it spurred totaled between $11.4 billion and $23 billion. Losses experienced this year will add quite considerably to that grim tally.

Even if rain and snow return copiously in coming years, it will take at least several seasons, and possibly even several years, of above-average precipitation "to replenish the reservoirs, rivers, streams, and soil moisture that 60+ million people depend on for their water, livelihoods, food, power, and recreation," the report states. "This, when coupled with the La Niña forecast for the coming winter, suggests the ongoing Southwestern U.S. drought will very likely last well into 2022, and potentially beyond."

Over the longer term, until human-caused warming is halted through vigorous action to reduce greenhouse gas emissions, the Southwest is likely to become increasingly arid. "While 2020–21 was an exceptional period of low precipitation, the drought that has emerged is a harbinger of a future that the U.S. Southwest must take steps to manage now," the report concludes.

Map the World’s Coral Reefs for NASA with NeMO-Net