The Arctic is Warming Faster Than Previously Thought

This is not just a problem for polar bears. That's because what happens in the Arctic does not stay in the Arctic. 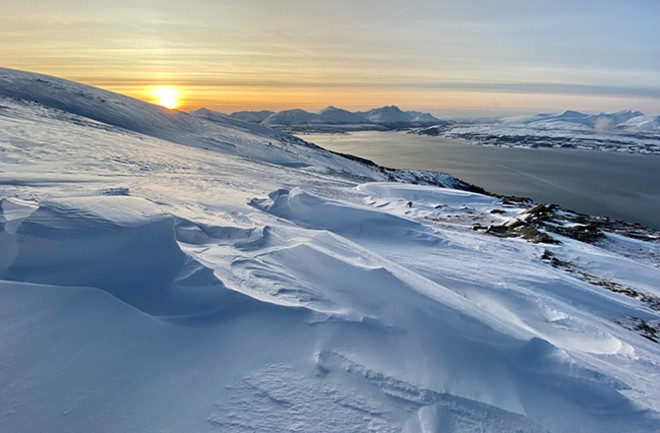 As seen from a mountainside above the Arctic city of Tromsø, Norway, the sun poked up ever-so-briefly on January 26, 2020. New findings suggest the Arctic is warming even faster than previously believed. (Credit: ©Tom Yulsman)

As U.S. President Joe Biden prepares to sign historic climate change legislation, the Arctic is reminding us that much more is needed to forestall catastrophic impacts.

Long considered the "canary in the coal mine" for climate change, the Arctic has been warming faster than the globe as a whole. Now, new research suggests it's heating up much more rapidly than previously thought.

Numerous previous studies had found that due to a phenomenon known as Arctic amplification, the region was warming either twice, more than twice, or even three times as fast, as the globe on average. But Finish scientists, using several sets of observational data, have found that over a little more than four decades, the actual rate of Arctic warming has been nearly four times faster.

Some parts of the region saw even more extreme Arctic amplification. For example, sea areas near Novaya Zemlya, a Russian archipelago in the Arctic Ocean, have experienced a rate of warming up to seven times faster than the global average.

"This is alarming, because the Arctic contains sensitive and delicately balanced climate components that, if pushed too hard, will respond with global consequences," says Jonathan Bamber, a scientist who studies Earth's cryosphere using satellite data. Bamber, who was not involved in the research, discusses the findings in a story at The Conversation.

Footsteps in the snow atop the Longyearbreen glacier in the Arctic archipelago of Svalbard point metaphorically to a much warmer — and perilous — future. (Credit: ©Tom Yulsman)

One example of possible global consequences: dramatic acceleration of global warming caused by melting permafrost in the Arctic. Such a thaw could offer microbes a sumptuous feast of organic matter, causing them to produce large amounts of carbon dioxide and methane — the latter being an extremely potent greenhouse gas.

The amount of carbon available for this process is beyond enormous. It has been estimated that Earth's permafrost currently stores about 1.6 trillion tons of carbon — more than twice the amount in the atmosphere today.

Needless to say, we can't afford for that carbon to make its way into the atmosphere.

This animation shows how the extent of Arctic permafrost, as well as sea ice, changed between 1997 and 2019. Watch for the retreat of the darkest blue color, and expansion of lighter blue colors, revealing permafrost in decline. (Credit: ESA)

"Should permafrost thawing accelerate, there is the potential for a runaway positive feedback process, often referred to as the permafrost carbon time bomb," Bamber says. This in turn would accelerate global warming, hastening and greatly worsening impacts such as sea level rise and heat waves.

Shrinking of the Arctic's floating lid of sea ice is thought to be a major cause of Arctic amplification. Sea ice reflects away much of the sunlight that hits it, helping to keep Arctic temperatures frigid. But as the atmosphere has warmed from our emissions of greenhouse gases, Arctic sea ice has shriveled significantly, exposing increasing swaths of ocean.

Unlike reflective ice, dark ocean waters hungrily absorb solar energy and warm up significantly during summer. This delays freeze-up in the fall, allowing stored summertime heat to be released into the atmosphere.

The more the climate warms, the more sea ice melts. This leads to more warming, which causes even more ice shrinkage and yet more warming — all in a positive feedback loop that goes a long way towards explaining Arctic amplification.

Why have previous analyses based on observations produced lower estimates of how much more the Arctic has warmed? One possibility is differences in the way the analyses were done. Another is that the earlier estimates may simply be outdated due to continued warming in the Arctic.

What Have Climate Models Shown?

Climate models have been able to simulate Arctic amplification. But the Finish scientists found that models simulate less amplification than was actually observed between 1979 and 2021. That's even true for the latest, state-of-the art models.

As the researchers put it, "climate models struggle to simulate [the] four-fold Arctic amplification ratio."

The year 2020 tied for warmest year on record globally, according to NASA. This map shows how temperatures varied from the long-term average, revealing that some areas of the globe experienced greater anomalous warmth than others during the year. The dark red tones at the top of the world reveal that the Arctic was warmest region of all, an outcome traced to the phenomenon known as Arctic amplification. (Credit: NASA GISS)

It's not that they don't simulate it at all. It just that when models are run repeatedly, they almost never produce that high degree of amplification. But very rarely, they actually do.

Thus, it could just be that there's nothing terribly wrong with the models. Instead, the four-fold warming of the Arctic compared to the globe overall may simply be an extremely unlikely event that has, unfortunately, happened. To put it another way, when pushed by our emissions of greenhouse gases, the Arctic climate was actually most likely to have responded less aggressively than it actually has. But due to a very rare throw of the climatic dice — unlucky for us! — the warming has been particularly severe.

Another possibility is that there really is an issue with the models — specifically, errors in how sensitive they are to forcing of the climate by greenhouse gases. There may also be issues in how in they simulate the flows of energy between the atmosphere, cryosphere and the ocean.

This is not just an academic problem for researchers to wrestle over. If the models do have issues, then they may not be giving as accurate a picture of how storm tracks might change as different parts of the Earth warm at different rates, and how that in turn could affect the climate in different regions. Accurate projections of these kinds of shifts are important because they can help us to prepare better.

How Much Will the Climate Legislation Help?

Three independent research groups have estimated that the Inflation Reduction Act, which President Biden will soon sign into law, will reduce U.S. greenhouse gas emissions by about 40 percent by the end of this decade. That's two-thirds of what's needed for the United States to meet it's commitment under the Paris Agreement, an international treaty on climate change.

If that actually happens, it would be a remarkable achievement. But the United States would still have a long way to go to eliminate its emissions of carbon dioxide to the atmosphere by 2050. Moreover, scientists say that all major economies must meet that same mid-century goal if we are to keep the global average temperature from rising more than 1.5 degrees Celsius, or 2.7 degrees Fahrenheit, above preindustrial levels.

If the world does pass that threshold, risks for much worse heat waves, wildfires, heat waves and other catastrophic climatic impacts, would rise significantly.

Meet the Firefighting Goats of Dublin