Seafood Is the Next Animal Protein Coming Out of Labs

Lab-grown salmon, tuna and more could mean less mess and no nets 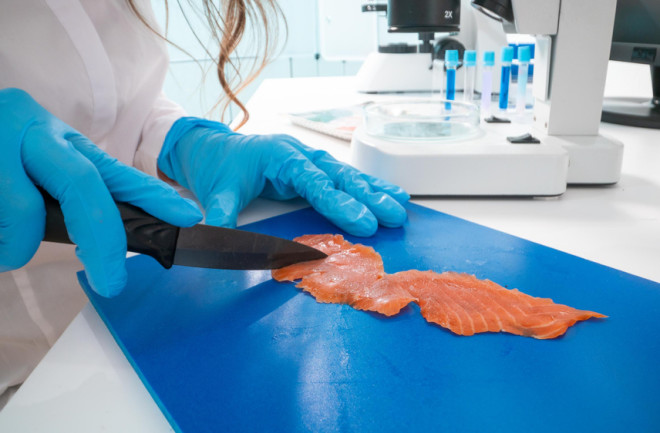 As lab-grown beef patties and chicken tenders cruise through development, it makes sense that companies are trying to grow another animal protein, one Americans have been hauling out of the oceans in increasing volumes: Seafood.

Startups around the world are coaxing fillets of salmon, tuna and more out of their labs. The protocol follows the same basic blueprint other companies use to grow beef or chicken. Scientists extract cells from their target species and give them the hormones, proteins and nutrients needed to multiply. As the cells grow and differentiate in a bioreactor supplying ideal conditions, the flesh spreads out over a scaffold until, ta da — the fillet in its desired shape and form materializes. What distinguishes lab-grown seafood from lab-grown meat appears in the nitty gritty details of how the lab operates, as well as the reasons companies think their products will hold any appeal.

Leaving Fish in the Sea

Conversation around why customers might want a lab-grown meat often focuses on the emissions and pollution that come with farm animals. Livestock accounts for about 14.5 percent of all human-made greenhouse gas emissions, and lagoons of hog waste can overflow into communities. For lab-grown fish, the environmental motivators are less about emissions from growing as much as we want and more about running out of what we’d like to eat.

Estimates suggest over 80 percent of wild fish populations are over-harvested. And while farmed fish has taken off as an alternative, much of what aquaculture companies feed their stock is wild sardines, anchovies and other smaller species. About 20 percent of wild fish caught are fed to other farmed animals. Easing up on our demand for wild populations will require eating less seafood, eating more of the species that producers feed to farmed fish, or as various start-ups hope, eating lab-grown fish.

Companies behind cell-culture varieties also hope to win over consumers with a few other factors. Growing only the desirable filets means no bones, scales, guts or shells to deal with. Cultured Decadence, a start-up growing lab-based lobster in Madison, Wisconsin, knows their products can’t compete with versions fresh out of the ocean if a diner wants to crack a shell themselves. But for the food product manufacturers turning out bisques and iconic summer sandwiches, dodging the work and waste of all the other lobster components could be appealing. “We're just getting what the customer and the consumer wants, which is the meat,” says John Pattison, co-founder of the start-up.

In initial interviews with potential clients, the Cultured Decadence team heard from chefs that they sometimes avoided lobster and other shellfish because of the training and time required to get to the meat. Lab-grown seafood could also offer up meat year-round, instead of a supply that ebbs and flows the way, say, Maine lobster does, with the biggest catches coming in the summer and fall.

And compared to similar attempts at fostering petri dish versions of cow or chicken, lab-made fish might be easier to pull off, thanks to cell biology. Research groups multiplying fish cells found that the ideal temperatures can mimic real-life conditions for the species, like the lab that grew bluefin tuna cells at the same temperatures the fish rely on to spawn. Mammal cells typically need higher temperatures to grow, which bioreactors artificially provide, meaning lab-based fish could be less energy intensive.

Some of the fish-specific ingredients a bioreactor might need could be hard to come by, however. One of the most common additives to cells grown in a lab — from replacement burger meats to human cell research — is a serum extracted from fetal cows. By definition, fish aren’t mammals, and serums that match their own biology are difficult to obtain, says Michael Saad, a bioengineer at Tufts University studying lab-grown fish cells with support from the Good Food Institute, a nonprofit supporting the development of alternative proteins. “The next challenge would be to get our hands on fish blood,” Saad says, “but it's not the easiest task, especially because fish are so much smaller — there's just a lot less blood present in a fish.”

If researching, sourcing or extracting the right growth aides for lab-based fish is challenging, the same can be said for cultured mollusk meat — something Pattison and his cofounder, Ian Johnson, observed. The Cultured Decadence scientific team continues doing research, while other companies have found their way around the issue: BlueNalu, a startup growing yellowtail filets, says it’s developed a way around using fetal bovine serums.

Cultured Decadence is still in the research and development phase. When products come to market, the company plans to offer different types and grades of lobster meat — foods that could be sold under a wide variety of names. How to help consumers understand lab-based meats is a hot topic amongst psychologists, engineers and ecologists. Shopper interpretation could ride heavily on what the package says, like “cultured” or “cell-based” or “cultivated.”

Since plant-based products meant to be indistinguishable from the real proteins are also growing in popularity, it’s important to help consumers distinguish between what is plant-based and what is a living animal cell grown in a lab, Pattison says. This is particularly true for products where buyers might have allergies to the real thing, like shellfish.

Ultimately, Pattison thinks that consumers will determine for the fledgling industry what lab-based fish, or any other animal product, ought to be named, likely with guidance from the FDA and other regulatory agencies. “At the end of the day, we're making the real thing with a different method,” Pattison says. Of course, lab settings allow developers to tweak the meat however they’d like — meaning the final product could always compare to the sweetest and most tender lobster meat around, no traps required.