Did 2021 Deal a Fatal Blow to Climate-Change Denial?

Data and extreme weather events are making it harder than ever to ignore our warming world. But climate change denial has also taken on a new form. 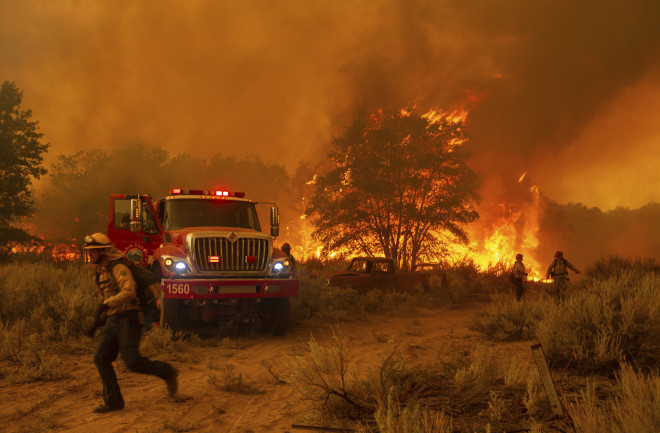 From brutal heat in North America and Siberia to devastating flooding in China and Europe, 2021 delivered worsening climate extremes of the kind long predicted by scientists. Streetcar cables melted in Portland. A raging river swept away entire homes in Germany’s lush Ahr Valley wine region. And wildfires have set records across the globe in the past two years.

For many people, recent disasters have transformed human-caused climate change from a theoretical, far-off risk to an undeniable reality. And this summer, the United Nations dropped a landmark climate report, emphasizing that avoiding even worse impacts will require deep, rapid cuts in greenhouse gas pollution. But does that mean 2021 will be remembered as the year denial of climate change all but died?

At least one renowned environmental scientist believes so. “I think you have seen a seismic shift,” says Jonathon Foley, executive director of Project Drawdown, a non-profit that advances climate solutions. “Most of the conversation now is really more about what we should do, not denying whether or not climate change is happening.”

Other experts don’t go as far, saying denialism may be waning but is not yet dead. They also warn that promoters of climate denial now emphasize delaying action.

That said, even Harvard University science historian Naomi Oreskes, co-author of Merchants of Doubt, thinks something has shifted. Her 2010 book documented how politically motivated scientists teamed with corporate and other interests to cast doubt on the science of many issues, starting with tobacco and leading to global warming. Now, years later, she says, “This is a glass half-full, half-empty problem. There are certainly a lot of things to feel good about.”

“I do think our country and world have changed in important ways,” says Edward Maibach, director of the Center for Climate Change Communication at George Mason University. “We’re now in an inevitable transition to an economy in which we are no longer emitting carbon dioxide into the atmosphere.”

The shift may not be surprising, given the clear rise in weather and climate extremes documented by the U.N.’s Intergovernmental Panel on Climate Change (IPCC) report. In 2021, we saw heat waves, like the shattering of high temperature records in June on the Pacific coast of the U.S. and Canada. July brought torrential rains in Western Europe. Deluges followed in China’s Henan province, where half its average annual precipitation fell in just six hours, triggering flooding that killed more than 300 people. And the western U.S. has seen a profound increase in wildfire activity, a point driven home by multiple 2021 megafires of 100,000 acres and greater.

As Foley puts it: “Denial of the basic reality of climate change is no longer credible.”

But what was denialism about in the first place? The answer offers insights into an era of delayed action that may be the new zeitgeist.

Katharine Hayhoe, an atmospheric researcher and chief scientist for The Nature Conservancy, argues that most people who dismiss climate change aren’t really denying its basic physics. Rather, they fear solutions pose more risks to them — to their finances and lifestyles, for example — than climate change itself. But instead of admitting that, “people grasp at the straws of denial offered by the merchants of doubt.”

Hayhoe believes that’s changing. “There are some very large see-through holes in that smokescreen of denial today,” she says. “With record-breaking heat in June, rather than July or August, with rising sea levels, people can see with their own eyes that now something is happening where they live.”

Surveys support her view. Maibach notes that when his center began polling in 2008, a majority of Americans surveyed did believe the climate was changing but saw it as a distant threat. “Half now see climate change as a clear and present danger in their own communities,” he says.

But many industries still oppose meaningful climate action and are trying to delay it while shifting blame from corporations to individuals, argues Penn State climate scientist Michael Mann in his 2021 book The New Climate War. To delay action, corporate interests and their supporters in government have executed what he calls “a deflection campaign.” They place the responsibility for battling climate change on consumers, insisting that they must change their behavior.

Does this mean we’ve transitioned from denialism to delayism?

Oreskes sees no distinction. “Delay is denial, because the scientific evidence is overwhelming that we have to act now,” she says. “It’s all a package, and it all has the same purpose, which is to keep us using fossil fuels.”

Foley expresses similar concerns. “I think we’re entering a new age of subterfuge,” he says. Fossil fuel companies are trying to look like they support action on climate change, he adds, while they are just doing “business as usual.”

At the same time, greenhouse gas emissions have peaked in roughly 50 countries and are now going down, according to Foley. In the U.S., emissions have dropped by roughly 20 percent since 2007.

“That’s pretty good news,” he says. “Not good enough. But at least we’re bending the curve in the right direction.”

Without even faster and deeper cuts, though, future impacts could make 2021’s heat waves, wildfires and deluges look tame.

Even amidst summer’s climatic misery, a report from the Intergovernmental Panel on Climate Change (IPCC) seemed shocking when it arrived in August.

Every inhabited region on Earth is now experiencing climate changes not seen in thousands, and even hundreds of thousands, of years, the report revealed. And with atmospheric CO2 exceeding any level known in at least 2 million years, long-term changes are inevitable, including continued increase of the planet’s temperature, melting of glaciers and ice caps, and rising seas.

We’ll most likely also see more heat waves, droughts and deluges. Even if we were to swiftly slash greenhouse gas emissions enough to cap global warming at 1.5 degrees Celsius (2.7 degrees Fahrenheit) by mid-century, we should expect an incidence of extreme events “unprecedented” in climate records, according to the report. (We’ve got only about 0.4 C to go.)

Still, we can limit climate change with “strong and sustained reductions in emissions of carbon dioxide and other greenhouse gases,” the IPCC said in a statement. In fact, failure to do so could lead to misery far worse than what we’ve seen. — T.Y.