These changes could pose particular challenges for the astonishing creatures of the Galápagos Islands — epicenter of El Niño and La Niña. 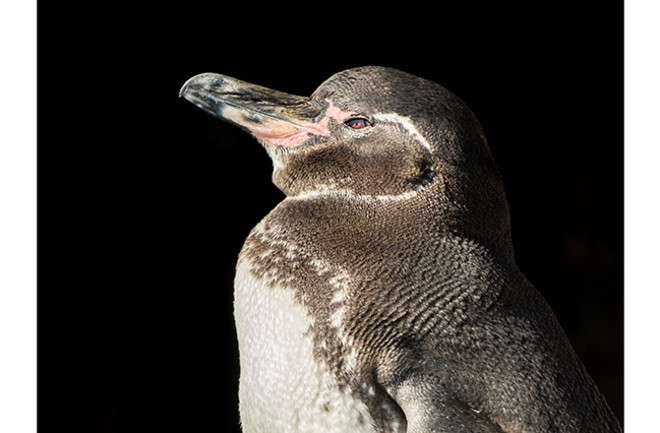 An endangered Galápagos penguin, photographed in October on Santiago Island, just 25 miles south of the Equator in the Galápagos archipelago. This endangered endemic species is able to survive so far north because of cool ocean temperatures — which are even cooler than normal right now because of the La Niña climatic phenomenon. (Credit: ©Tom Yulsman)

During a recent trip to the Galápagos Islands, I eagerly plunged into the equatorial waters, hoping to snorkel with sea turtles, sea lions, and maybe even penguins.

The possibility of swimming with penguins should have tipped me off that the toasty, tropical swim I was anticipating wasn't actually on offer. In fact, before too long, I was scrambling back into our dinghy — where I shivered uncontrollably for a good long while.

I eventually did get to see a penguin — the one in the photo above. I took its portrait on Santiago Island, 25 miles south of the Equator. These flightless sea-going birds, usually associated with Antarctica, are able to survive here in the tropics because of ocean currents that deliver deep, cold, nutrient-rich water to the Galápagos.

A Temperature Tug of War

The La Niña climate phenomenon — now in its third year and projected to last through winter — has brought an even greater chill to the waters around the archipelago. And over the longer term, the cool oceanic patch in and around the Galápagos has actually fended off the effects of global warming. According to recent research, it has cooled by 0.9 degrees Fahrenheit since the early 1990s, thanks to a strengthening and shifting of one of the deep ocean currents that bring cool water to the region.

“There's a tug of war going on between our greenhouse effect causing warming from above, and the cold ocean current," says Kris Karnauskas, author of the study and a researcher at the University of Colorado. "Right now, the ocean current is winning — it's not just staying cool, it’s getting cooler year after year,” Karnauskas is quoted as saying in a release from the university.

A Nazca booby, photographed on Española Island in the Galápagos on Oct. 23, 2022. (Credit: ©Tom Yulsman)

This could temporarily protect marine animals like penguins from global warming. But a deeper chill in the region, combined with La Niña, could also cold-shock corals and cause harm to other organisms.

Moreover, by affecting La Niña and its opposite, El Niño, human-caused climate change could bring an array of challenges to the animals of the Galápagos, including penguins — and far sooner than previously expected. That's among the implications of new research showing that climate change will soon drive significant changes to El Niño and La Niña events.

El Niño and La Niña are two sides of a climatic coin called the El Niño-Southern Oscillation, or ENSO. "Scientists already knew climate change was affecting the El Niño–Southern Oscillation," writes Wenju Cai, a co-author of the study, and a scientist with Australia's Commonwealth Scientific and Industrial Research Organisation. "But because the oscillation is itself so complex and variable, it’s been hard to identify where the change is occurring most strongly."

Now, the study by Cai and colleagues shows that the change is likely to become evident in the form of significant shifts in ocean surface temperatures in the eastern tropical Pacific — the location of the Galápagos. Moreover, these shifts will become "obvious and unambiguous within about eight years," 40 years earlier than previously thought, the scientists say.

The two cold oceanic currents that converge on the Galápagos bring a huge volume of nutrients from the depths that sustain a rich marine ecosystem, including cold-water fish, such as anchovies, sardines and mullet. The current that appears to be strengthening, called the Equatorial Undercurrent, flows eastward some 8,000 miles from Papua New Guinea toward South America. It transports an astonishing 10 billion gallons of seawater every second.

The other cool oceanic river is the Humboldt Current, which flows north from Antarctica along the west coast of South America and up to the Galápagos. It's driven by strong winds that push aside warm, nutrient-poor surface water, allowing the cold, nutrient-dense Antarctic water to surface, where it also helps sustain the rich ecosystem that nourishes marine animals like Galápagos penguins.

During a La Niña event like the current one, trade winds along the Equator strengthen, allowing yet more cool water from the depths to surface. This provides a bounty of food for marine animals. But land animals in the Galápagos, such as land iguanas, tend to suffer. That's because La Niña enhances drought, decreasing the availability of their food.

This animation shows water temperatures in the top 2,300 feet of the tropical Pacific Ocean from September through October 2022, as compared to the 1991–2020 average. With the current La Niña, easterly trade winds are blowing more strongly than usual along the Equator, pushing aside warm surface waters and allowing a blob of particularly cool water to surface from the depths. (Credit: NOAA Climate.gov animation, based on data from NOAA's Climate Prediction Center.)

The opposite happens during an El Niño. The trade winds slacken, and more rain tends to fall on land, benefiting terrestrial animals. But with weaker trade winds, there's less upwelling of cold, nutrient-rich water. As a result, marine animals suffer.

Flightless marine birds, such as the Galápagos penguin, are particularly vulnerable because they can't migrate to other areas to find food. In fact, during the strong El Niño of 1982/83, the archipelago's penguin population declined by 80 percent. After a slow and only partial recovery, the intense El Niño of 1997/98 wiped out 65 percent of the remaining penguins.

Only an estimated 2,000 Galápagos penguins remain in the wild today. In addition to climate shifts, they and many other species endemic to the archipelago are threatened by a range of impacts from human activities.

These include diseases as well as invasive species, such as feral pigs, dogs, cats, and myriad insects, all brought to the islands by colonizers, farmers, pirates, and more recently, tourists. To get a sense of the scale of this problem, consider that more than one quarter of all insect species on the Galápagos are introduced, meaning that more that 500 species are non-native.

Of the native species that live here, some 80 percent of land birds, 56 percent of insects, and 43 percent of terrestrial plants, are endemic, meaning they're found nowhere else on Earth. So when any one of them disappears from the Galápagos, they will be gone forever, extinct.

Because of the isolation of the Galápagos, which lie 600 miles from the South American coast, tourists often perceive the islands to be an oasis of life protected from the environmental impacts afflicting other parts of the world. Nothing could be further from the truth. And while scientists can't be sure exactly how and when our myriad impacts — from invasive species to strengthened El Niño and La Niña events — will ultimately play out, the odds do not favor the astonishing creatures of the Galápagos.

If we value life, we should do something about this.

Will Woolly Mammoths Ever Make a Comeback?

The Road To Low-Carbon Concrete

We’ve Been Worried About Overpopulation for Millenia