Dramatic satellite imagery reveals the scope of the blaze — now as large as Manhattan Island and burning out of control. 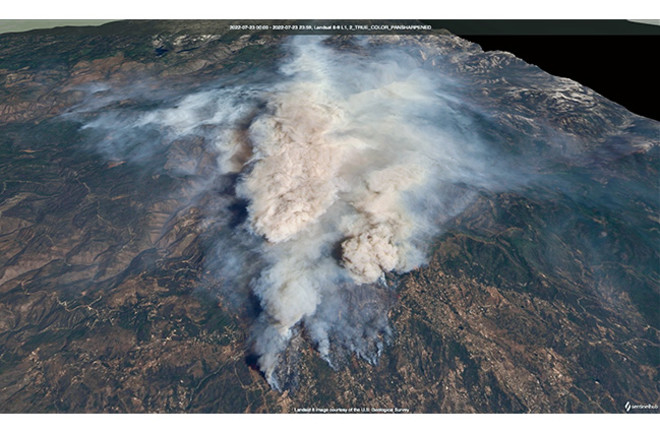 So far, California's Oak Fire blazing near Yosemite National Park has burned through through 14,281 acres — an area equivalent to the size of Manhattan Island. That makes it California's biggest wildfire this season.

As of Sunday, July 24, it has forced at least 3,000 people to evacuate, has destroyed 10 structures, some of them homes, and is completely uncontained, according to the California Department of Forestry and Fire Protection. The cause of the blaze, which began in the afternoon of July 22 about two miles northeast of Mariposa, is under investigation.

“The fire is moving quickly," Daniel Patterson, a spokesman for the Sierra National Forest, said Saturday, quoted by Wildfire Today. "This fire was throwing embers out in front of itself for up to two miles yesterday. These are exceptional fire conditions."

The blaze exploded in intensity and size on Saturday. Here's what that looked like from space, as seen by the GOES-16 satellite:

Landsat passed over the Oak Fire today. I used imagery acquired by the satellite to create this virtual 3D flyover of the scene:

The video begins over Eastman Lake, a reservoir in the foothills of the Sierra Nevada Mountains, and then moves north to the Oak Fire, a distance of about 20 miles.

More than 90 percent of Mariposa County, where the Oak Fire is burning, is suffering through exceptional drought. That's the most extreme drought category.

"The heating of the planet is turning landscapes into tinder boxes, while more extreme weather means stronger, hotter, drier winds to fan the flames," concluded a report issued in February by the United Nations Environmental Program. "Too often, our response is tardy, costly, and after the fact, with many countries suffering from a chronic lack of investment in planning and prevention."