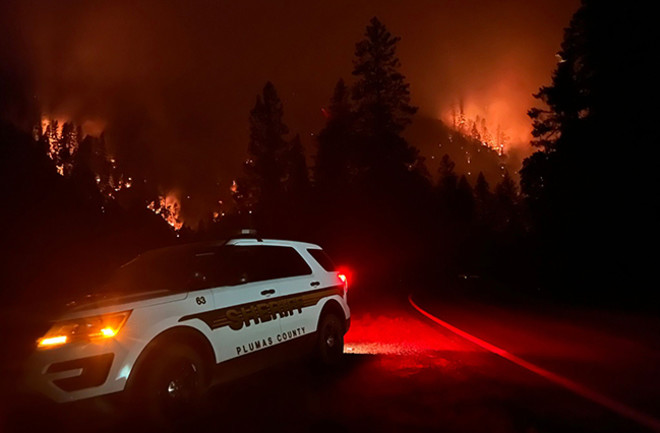 Just a day after it ignited on July 29th, California's McKinney Fire exploded in intensity, burning so hot that it exceeded a satellite sensor's ability to measure it while lofting multiple fire clouds high into the atmosphere.

Now, heavy rains in the area have sent torrents of water, mud and debris down streams, knocking out a bridge and inuring a man who was helping to battle the blaze — which has grown to a third of the size of New York City.

On the night of Aug. 2, 2022, a rampaging flow of water, mud and debris took out a bridge near California's McKinney Fire, injuring a man traveling in this truck. He was helping to battle the blaze. (Credit: Siskiyou County Sheriff's Office.)

The rains did help slow the advance of the blaze. But hot temperatures, very dry conditions, and gusty winds are likely to reinvigorate the fire once again. The forecast for the rest of the week is for temperatures in the high 90s, and even reaching the low 100s over the weekend.

Late in the day on Saturday, July 30th, the McKinney Fire exploded in intensity and lofted five or six pulses of fire clouds, known as pyrocumulonimbus, or pyroCbs.

This was an unusually high number of these pyroCbs, "probably caused by the abundance of very dry fuels, combined with gusty, terrain-enhanced winds," says Scott Bachmeier, a research meteorologist with the University of Wisconsin's Cooperative Institute for Meteorological Satellite Studies. "It's likely an indicator of just how bad the drought is in that region — and meteorological conditions were right for the rapid spread of the fire across the dry fuels."

A toggle between imagery from the VIIRS instrument aboard the NOAA-20 satellite reveals the bright nighttime glow and hot infrared signature of active fires around the perimeter of the McKinney Fire during the overnight hours of July 31, 2022. (Credit: Cooperative Institute for Meteorological Satellite Studies)

Bachmeier also reports that the wildfire burned very hot — so much so that it exceeded the ability of a sensor aboard the GOES-17 satellite to measure it. "Many major fires get that hot — especially the ones I've seen that have been producing pyroCbs lately," he says.

The false-color image above shows the view from space, as recorded by the Sentinel 2 satellite on July 30. To create it, I combined visual imagery with infrared data to show both the heat of the flames and the smoke they were lofting into the atmosphere.

Looking ahead, temperatures in Northern California are likely to remain above average for the next eight to 14 days, according to NOAA's Climate Prediction Center. There are equal chances for above and below average precipitation.

If rainfall is accompanied by lots of lightning, it could be a mixed blessing, because that could ignite new fires. Moreover, all of California is in drought, with 60 percent of the state — including all of Siskiyou County, sight of the McKinney Fire — in extreme drought, the second most intense category. This does not bode well for the coming weeks.

Watch as California Gets Bombed

The Home Planet as Seen From Space in 2022