Back From the Brink: Restoring Prairies With Fire

The expansion of trees into grasslands has caused a host of economic and ecologic issues worldwide. These Nebraska landowners figured out a solution. 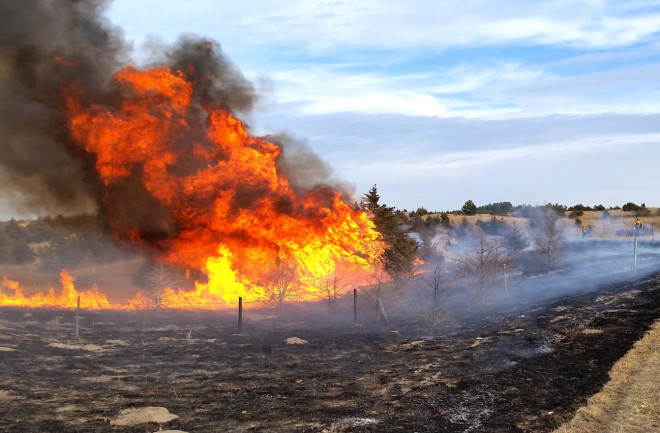 A half-century ago, you would be hard-pressed to find a Christmas tree on Nebraska’s wide-open plains. But these days, as eastern redcedars invade the Great Plains grasslands, trees are a dime a dozen.

Until recently, this transition from grasslands to woodlands — a common problem worldwide — was thought to be irreversible. But ranchers in Nebraska’s Loess Canyons are proving it’s possible to restore healthy grasslands by fighting trees with fire. A 15-year study published this summer shows that reinstating fire in the Loess Canyons has turned the tide on invading redcedar, one of the first examples that people can halt the transition of grasslands to woodlands at large scales.

“The Loess Canyons is one of the coolest large-scale experiments on fire restoration in the world,” says Dirac Twidwell, a rangeland ecologist at the University of Nebraska-Lincoln who co-authored the study. “Landowners have figured out how to safely burn their rangelands so they can sustain livestock and wildlife.”

Along with the Serengeti in Africa, America’s Great Plains — including the Sand Hills ecoregion in Nebraska — hold some of the most intact grasslands left in the world. But from Texas to South Dakota, eastern redcedars are threatening these last, best prairies. Remote sensing technology shows that from just 1999 to 2018, tree cover increased across 44 million acres of the Great Plains. That’s roughly the size of Kansas.

Ranchers like Scott Stout call it “the green glacier.” “Our prairie pastures were turning into forests where nothing could grow except more redcedar,” says Stout, who lives in the Loess Canyons and is president of the Nebraska Prescribed Fire Council.

Denser trees harm more than just ranchers’ bottom line. Encroaching junipers like the redcedar spell bad news for wildlife species that depend on wide-open prairies, such as the northern bobwhite bird and black-footed ferret. Lesser prairie-chickens, for instance, are 40 times less likely to use grasslands with just five trees per hectare compared to a landscape without any trees. Even grassland-dwelling insects prefer open canopies: The abundance of American burying beetles, a federally threatened species now found in only four states including Nebraska, is negatively associated with tree cover.

The proliferation of eastern redcedar even impacts urban areas by reducing the amount of water available in streams and aquifers. Model simulations show that complete conversion of rangelands to redcedar woodland would deplete the Platte River, a water source for one million Nebraska residents, and reduce streamflow by 20 to 40 percent throughout the south-central Great Plains.

To save their disappearing prairie, Stout and his neighbors formed two prescribed burn associations in the Loess Canyons. More than 100 landowners south of the Platte River have shared their equipment and expertise in an effort to burn 135,000 acres since 2004, amounting to one-third of this biologically-unique landscape.

According to Twidwell, the Loess Canyons is an experimental landscape that holds promising clues on how to shift juniper woodlands back to biodiverse grasslands. “It's not just about having some fire on the ground, it's about restoring fire as a broadly functioning part of the ecosystem,” he says. “It matters how and where fire occurs, its intensity and frequency — all of that really drives the ecosystem, just as much as rain does.”

One key to successfully restoring the Loess Canyons is the strategic use of high-intensity prescribed fires in a few locations. Before burning, the landowner first cuts isolated trees along the perimeter and piles the dead limbs beneath dense canopies of eastern redcedar located in the center of the planned burn area. This allows volunteers to safely contain the low-intensity grass fire along the burn’s perimeter, and helps the forested interior burn hotter to incinerate seed sources.

Long-term vegetation monitoring in the Loess Canyons shows these high-intensity fires create a biodiverse grassland just one year after a burn. Burns reduced tree cover from less than 50 percent back down to historic levels of less than 10 percent — and increased the abundance and diversity of perennial plants. Plus, results appear to last: Surveyed burned areas were still dominated by perennial grasses 15 years later.

“We didn’t really notice the quality of range had degraded until we saw what we gained back,” Stout says. “The grasses are much more abundant following a fire. It amazes me it took us so long to figure that out.”

Research from the Loess Canyons also shows that wildlife is responding positively to the more frequent fires. Alison Ludwig, a graduate student at the University of Nebraska-Lincoln, documented increases in the abundance of American burying beetles after prescribed fires restored the insect’s preferred herbaceous habitat.

Plus, a forthcoming study in Ecological Solutions and Evidence will provide the first evidence that burning benefits populations of grassland birds at an ecoregion scale. Grassland bird richness increased across 65 percent (222,000 acres) of the Loess Canyons after 14 years of fire treatment.

Twidwell says research from this experimental landscape is co-produced with landowners and resource managers: “We’re trying to strike a balance between science that is scientifically rigorous while also practical for rangeland producers and the people working on the ground to protect our remaining grasslands.”

To scale up the lessons learned from the Loess Canyons, researchers are partnering with Working Lands for Wildlife, a conservation effort led by the U.S. Department of Agriculture’s Natural Resources Conservation Service. The goal is to provide technical and financial support to more landowners across the Great Plains who are interested in using fire to prevent woody encroachment.

“Let's face it, fires are going to continue to occur,” Twidwell says. “The more we can figure out how to shape this natural event, the more we will be able to manage grasslands in a way that prevents out-of-control wildfires and benefits local ranchers, wildlife, water and the ecosystem as a whole.”

How The National Park Service Is Working To Prevent Wildfires