Arctic Weirding: After a "Strange" Summer, Yet Another Late-Season Melting Spike Hits Greenland

The Arctic has been beset by very warm temperatures in some places, along with extreme storms, and unheard of melt events heading into winter. 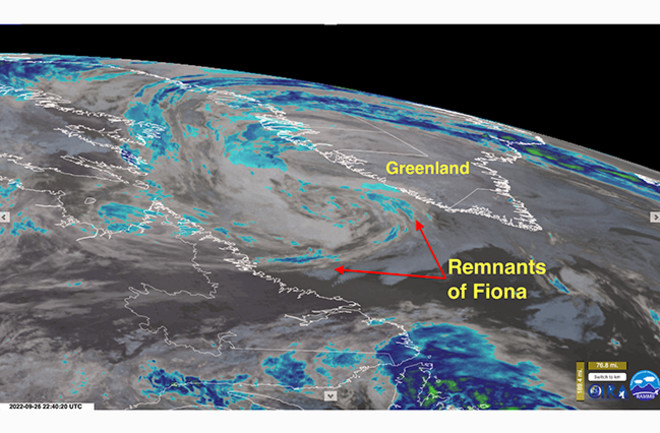 The remnants of Hurricane Fiona swirl near the southwest coast of Greenland on Sept. 26, 2022, as seen by the GOES-16 weather satellite on Sept. 26, 2022. The storm resulted in a spike of ice cap melting larger than has ever been seen before this late in the year — just as the Arctic heads into winter. (Credit: CIRA/RAMMB @ CSU)

It has happened yet again: On September 26th, a second dramatic spike of late-season surface melting occurred on the Greenland Ice Sheet even as the region was transitioning to winter.

The first melting spike occurred on September 3 — and was even bigger.

This time, it totaled 94,000 square miles — an area nearly the size of Oregon. That much surface melting in Greenland easily qualifies as "a record for this time of year," says Mark Serreze, Director of the National Snow and Ice Data Center.

The blue line in this graph shows the changing extent of surface melting on the Greenland ice sheet between April 1 and Sept. 26, 2022. Two late-season melting events are highlighted: one on 9/3/2022 and the second on 9/26/2022. Each one was record-setting for the time it occurred. In the graph, the orange line shows the extent of melting in 2012, which saw the greatest extent of melting in records going back 44 years. (Credit: National Snow and Ice Data Center)

The proximate cause was very warm and wet conditions swept in by the post-tropical remnants of Hurricane Fiona, which had earlier ravaged parts of Canada. But the ice sheet also was primed for a big melt event like this by much warmer than average temperatures over Greenland during September.

The September 3 surface melting episode totaled 232,000 square miles — an area nearly the size of Texas. Caused by a late-season heat wave, the event was "unprecedented in the 44 years of continuous satellite monitoring," according to the NSIDC.

This animation of two satellite images illustrates the dramatic extent of record-setting surface melting on the Greenland ice sheet in early September. The melting peaked on September 3, 2022. The next day, the clouds parted enough for NASA's Terra satellite to glimpse its aftermath. In one of the two images in the animation, look for the bluish tones speckled with darker blue melt ponds. By comparison, very little melting is apparent in the other image, which shows the same scene one year earlier, on Sept. 5th, 2021. (Credit: Images from NASA Worldview, animation by Tom Yulsman)

The two record-setting melt events, along with a superstorm that brought hurricane-force winds to the area around Nome, Alaska, were a fitting end to what turned out to be an unusual summer in the high north.

"What a strange year it was," Serreze says.

Among the oddities was the pattern of Arctic sea ice shrinkage during the summer. On the one hand, the overall loss didn't come close to setting a record. On the other hand, some areas of the Arctic saw very dramatic shriveling of sea ice. So much so, in fact, that areas of ice-free water called "polynyas" opened not far from the North Pole — something researchers hadn't seen previously that far north (poleward of 85 degrees North), according to Serreze.

Under 24 hours of sunlight, and warm temperatures, Arctic sea ice naturally shrinks in summer, reaching a minimum extent close to the middle of September. But thanks to human-caused warming — which is occurring three to four times faster in the Arctic than the globe overall — that annual minimum extent has been getting smaller and smaller over the long term.

Since 1979, the loss of Arctic sea ice relative to the long-term average has been about 30,300 square miles per year. That's equivalent to losing an extent of ice as large as the state of South Carolina or the country of Austria annually.

Arctic sea ice extent, seen here in white, bottomed out for the 2022 warm season on September 18, 2022. It tied for tenth lowest in the satellite record. The orange line shows the 1981 to 2010 average extent for that day. (Credit: National Snow and Ice Data Center)

This summer, Arctic sea ice bottomed out on September 18, and then began to expand as sunlight dwindled and temperatures dropped. At its minimum, the ice extent tied for tenth lowest in the nearly 44-year satellite record. While significant, this loss was nowhere near as severe as the record low, which occurred in 2012. (This year's minimum extent was 494,000 square miles greater than that year's nadir.)

But this isn't the whole story. In addition to those polynyas that opened near the North Pole, others areas of the Arctic saw unusual ice losses.

For example, as of Sept. 28th, the Northern Sea Route in Arctic waters above Siberia was still open for boats to pass through. So were the two routes that make up the famed Northwest Passage in Canada, a southern one and a more northerly one.

"You could take a sailboat through the southern route," Serreze says. And while the northern route through Perry Channel has got some ice now, "you could find a path through."

Serreze notes that ice conditions respond very strongly to summer weather patterns. In years with particularly dramatic sea ice losses, high atmospheric pressure persist over the Arctic. But this year, high pressure conditions tended to decay and be replaced by low pressure. The result: It was unusually warm in some places but not in others.

"It was all higgledy piggledy," Serreze says.

With extreme storms, record-setting melt events at the dawn of winter, and unusually warm summer conditions in some places but not in others, 2022's warm season in the Arctic certainly seemed strange. But just how much so in the long-term climatic context isn't quite known, in part because modern observational records do not go back far enough.

Here is what is known for sure: From year to year, Mother Nature has long brought all sorts of climatic variation to the Arctic. But that natural variability now occurs atop human-caused climate change. Among other things, that means heat waves are even more intense, and post-tropical storms bringing warmth and wetness to the high north are warmer and wetter still.

Most importantly, until we stop emitting greenhouse gases into the atmosphere, this trend will only get worse.

Yes, Brutal Cold Is Barreling Down From the Arctic, but No, It's Not the Polar Vortex