Scientists are concerned that this could be a taste of things to come in a part of Antarctica previously thought to be relatively stable. 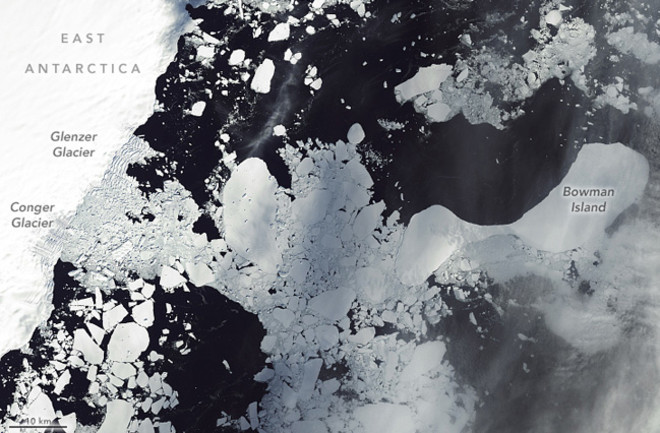 Shattered remains are all that's left of East Antarctica's Conger Ice Shelf, as seen in this image captured on March 23, 2022 by the Landsat 8 satellite. The giant floating slab of ice was more or less intact at the beginning of March but disintegrated in just two weeks. (Credit: NASA Earth Observatory.)

Antarctica's Conger Ice Shelf wasn't particularly big as these floating slabs of ice go. It was a little smaller than the city of Los Angeles.

Compare that to the continent's largest, the Ross Ice Shelf, which is about as large as all of France.

But when the Conger disintegrated in mid-March, it nonethless raised alarm among scientists. That's because all previous ice sheet collapses have occurred in West Antarctica. East Antarctica was thought to be relatively stable.

These massive aprons of ice extending out over the sea from the land help slow the march of glaciers into the ocean. When a shelf disintegrates, the glaciers tend to speed up, dumping more and more ice into the ocean, thereby contributing to sea level rise.

At the start of March 2022, the Conger Ice Shelf fed was intact, as seen by one of this pair of images. By March 15, it had disintegrated. Both images were acquired by the Landsat 8 satellite. (Credit: Images from NASA Earth Observatory. Animation by Tom Yulsman)

The Conger Ice Shelf had been eroding for about two years. Even so, it was intact at the beginning of March, as seen in one of the images in the animation above.

But then, all hell broke loose — or, more precisely, a gargantuan atmospheric river of unusual warmth and moisture did. The result was shocking: The ice shelf shattered in just two weeks, as the other image in the animation shows.

That atmospheric river, carrying unusual warmth and huge amounts of moisture, hosed East Antarctica on March 15. This was the headline-making event that sent temperatures soaring to unprecedented levels — by nearly 70 degrees F in one location, something completely unimaginable before then.

But it likely wasn't the high air temperatures that sealed the ice shelf's fate. Over the long term, it had been weakened by warming sea water, leaving it vulnerable. Then, the atmospheric river brought high winds that churned up big ocean swells. This seems to have caused the ice shelf to shatter and quickly disperse.

Catherine Walker of the Woods Hole Oceanographic Institution, observes that this is "something like a dress rehearsal for what we could expect from other, more massive ice shelves if they continue to melt and destabilize. Then we’ll really be past the turnaround point in terms of slowing sea level rise.”