A third consecutive La Niña winter will tip the odds in favor of continued drought across already water starved swaths of the U.S. 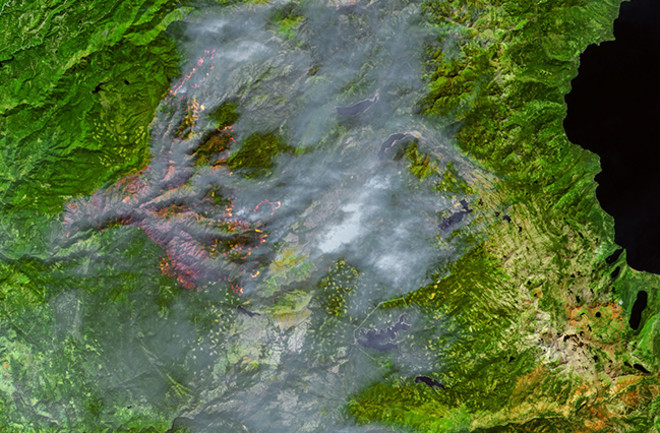 California's Mosquito Fire burns to the west of Lake Tahoe (on the right), as seen by the Sentinel 2 satellite on Sept. 16, 2022. With a third winter of La Niña in the forecast, the odds are tipped in favor of continued drought — and more wildfires like this — in the southern portion of the state. (Credit: Copernicus Sentinel data processed by Pierre Markuse.)

It looks like La Niña is staging an exceedingly rare three-peat.

The weather-influencing climate pattern is very likely to continue for a third consecutive winter, according to both NOAA and the World Meteorological Organization.

If it does, it would be only the third La Niña three-peat on record.

Sea surface temperatures in the tropical Pacific Ocean from mid-June through early September 2022 compared to the long-term average. East of the International Dateline (180˚), waters remained cooler than average, a sign of La Niña. (Credit: Graphic by Climate.gov, based on data from NOAA’s Environmental Visualization Lab.)

La Niña is characterized by large-scale cooling of the sea surface in the central and eastern equatorial Pacific Ocean, coupled with changes in atmospheric circulation. These shifts typically herald significant weather impacts around the globe.

What Can We Expect?

For large parts of the northern tier of the United States, La Niña can tip the odds in favor of wetter conditions. Meanwhile, La Niña winters tend to be drier across the southern tier. This includes the southern portion of California, and the American Southwest.

During a La Niña winter, the Pacific jet stream often meanders high into the North Pacific. Southern and interior Alaska and the Pacific Northwest tend to be cooler and wetter than average, and the southern tier of U.S. states—from California to the Carolinas—tends to be warmer and drier than average. Farther north, the Ohio and Upper Mississippi River Valleys may be wetter than usual. (Credit: Climate.gov image.)

With 94 percent of California in severe drought, the state’s water supplies have shriveled dramatically. As of the end of August, the capacity of the major reservoirs that provide 39 million Californians with water stood at just 55 percent of average.

A three-peat La Niña would also be terrible news for the Colorado River Basin, source of water for 40 million people. The region remains stricken by a decades-long megadrought — the worst in 1,200 years — that has starved the Colorado River of water. Meanwhile, consumption has for years outstripped supply.

The sun blazes over Hoover Dam and Lake Mead — the largest U.S. reservoir by volume — on June 29, 2022. An epic megadrought, greatly exacerbated by human-caused warming, has caused the reservoir to shrink to record low levels. A La Niña three-peat is likely to make things even worse. (Credit: ©Tom Yulsman)

The result: Lakes Mead and Powell — the two largest U.S. reservoirs by volume — have shriveled to record low levels. In response, the federal government gave the seven states of the basin an ultimatum to agree on a long-term plan for cutting their consumption. When they failed to meet the deadline, the U.S. Bureau of Reclamation imposed drastic cuts unilaterally. But experts agree that this is a mere Bandaid, and that a day of reckoning still looms ever closer.